Editor’s Note: This analysis is part of the USC-Brookings Schaeffer Initiative for Health Policy, which is a partnership between Economic Studies at Brookings and the University of Southern California Schaeffer Center for Health Policy & Economics. The Initiative aims to inform the national healthcare debate with rigorous, evidence-based analysis leading to practical recommendations using the collaborative strengths of USC and Brookings.

Medicare’s experience of paying for outpatient imaging services, particularly expensive advanced imaging such as MRIs, CAT scans, and nuclear scans, has been tumultuous over the last 20 years. The period was characterized by substantial increases in performance of advanced imaging services, mainly in doctors’ offices, followed by a shift to hospital outpatient departments (HOPDs) and then a leveling off of utilization, as shown in the chart below. These trends were influenced by an extraordinary number of legislative and regulatory policy changes, most of which reduced payment amounts for services paid under the Physician Fee Schedule (PFS) in doctors’ offices. This likely contributed to a movement of services to HOPDs, with payment based on the Outpatient Prospective Payment System (OPPS) where rates have been less impacted by policy changes. We termed this policy making process “dysfunctional” because there is no evidence that the results were anticipated or planned, despite the dramatic effect they have had on where advanced imaging is performed and at what cost. Moreover, we are not convinced that the current policy direction will result in a more coordinated and strategic approach. 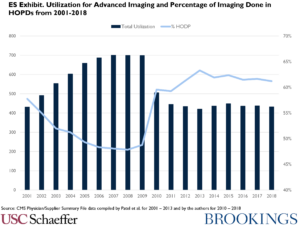 Despite the recent leveling of the volume of advanced imaging per 1,000 Medicare beneficiaries, both the price and utilization are considerably higher in the US than in other developed countries. In addition, the fee schedule payment amounts have evolved over the study period such that the payments for the same high-volume services are consistently higher in the OPPS than in the PFS. This phenomenon contributes to the trend of hospital acquisition of physician practices, a development that undermines competition in the physician and hospital services markets.

We offer three recommendations for improving Medicare’s treatment of advanced imaging in ambulatory settings, two of which focus on setting prices and one on managing utilization.