What’s the latest in health policy research? The Essential Scan aims to help keep you informed on the latest research and what it means for policymakers. It is produced by the USC-Brookings Schaeffer Initiative for Health Policy, a collaboration between the Brookings Institution and the USC Schaeffer Center for Health Policy & Economics. To sign up to receive the Essential Scan straight to your inbox, sign up here.

Medicare pays for most surgical procedures through a single bundled payment that covers the procedure and related postoperative care during the following 10 to 90 days. However, chart reviews by auditors suggested that fewer postoperative visits were actually provided than had been assumed when Medicare was setting payment rates. In 2015, Congress required CMS to collect the number and levels of postoperative visits provided, and use these data to improve the accuracy of the valuation of procedures. The first year of data collection showed that postoperative visits were reported during only four percent of minor procedures, despite Medicare’s assumption that nearly all minor procedures would include such a visit. For more complex procedures, only 39 percent of the number of visits Medicare assumed during the valuation process actually took place. In a New England Journal of Medicine Perspective, researchers modeled what would happen if Medicare’s valuation rate was adjusted to account for the decreased number of postoperative visits and found that this would cut Medicare payments for these types of procedures by 28 percent, or $2.6 billion in 2018. Since the program has a budget-neutrality policy, this cut would result in an increase for all other physician specialties, as shown in the chart below. However, they note that the complex nature of the current valuation system may make this unfair. The authors suggest that in the long-term, CMS should move toward a system that uses a range of inputs to permit more direct adjustments to valuations when new data become available. Full perspective here.

Chart 1. Estimated Change in Total Medicare Physician Payments for Selected Specialties after Revaluing of Procedures with 10- and 90-Day Post-Operative Periods 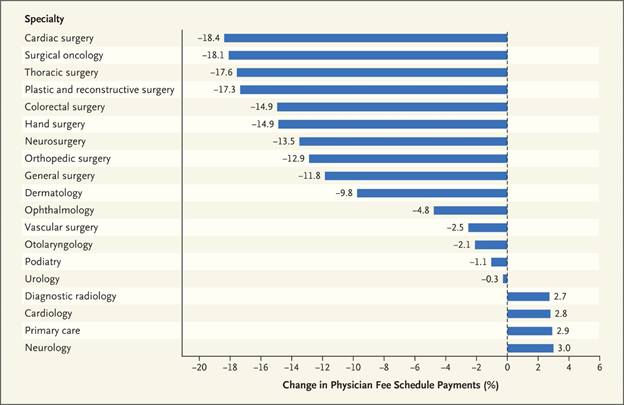 When a 2012 Supreme Court ruling allowed states to decide whether or not to expand Medicaid, some states opted not to expand the program due to concerns about how it would impact their budgets. This study estimates the state-level fiscal impact of expansion by presenting a new model for how the impact should be measured that is more robust than previous estimation methods. Using Michigan as a case study, the authors use Michigan’s House Fiscal Agency’s projection data and combine it with a proprietary macroeconomic model in order to show that through 2021, Michigan’s Medicaid expansion has clear fiscal benefits for the state with revenue exceeding cost each year. These fiscal benefits are twofold, coming both from savings on non-Medicaid health programs and an increase in tax revenue via provider taxes as well as sales and income taxes estimated to generate $140 million more in state tax revenue each year. The researchers conclude that their model can be used in other states when examining how Medicaid expansion will affect their bottom line. Full study here.

In 2012, Medicare implanted a series of incentives for providers to form accountable care organizations (ACOs) in an effort to bring down spending. However, the program has demonstrated only modest spending reductions. One explanation stems from the fact that ACOs can’t prohibit out-of-network care, which limits their control over spending. Research in the past has focused on out-of-network specialty care as the potential culprit, but a new study examined the association of out-of-network primary care in ACOs and per beneficiary spending. They found that more out-of-network primary care was associated with higher spending, especially primary care performed in outpatient and skilled nursing facilities, as well as emergency department settings. Out-of-network specialty care was not associated with an ACO’s performance. The results showed that ACOs serving poorer and sicker patients, as well as individuals from underserved communities were more likely to have high levels of out-of-network primary care, which researchers thought was a potential result of lacking the financial ability or physical mobility necessary to maintain continuity of care. The study suggests that in order to bring down Medicare spending, policymakers should create incentives for beneficiaries to seek primary care within their ACO network. Full study here.

The Effects of Medicare Advantage on Opioid Use