What’s the latest in health policy research? The Essential Scan, produced by the Schaeffer Initiative for Innovation in Health Policy, aims to help keep you informed on the latest research and what it means for policymakers. To sign up to receive the Essential Scan straight to your inbox, sign up here.

By: Abigail Durak, Will Palmisano, Stephanie Hedt, and Paul Ginsburg

Study by: Sarah Axeen, Seth A. Seabury, and Michael Menchine

From 1996 to 2012 the total quantity of opioids (measured by total milligrams of morphine equivalents) prescribed for non-cancer patients increased by 471 percent according to a recently published study. Though emergency departments have been the target of policy proposals, the researchers found the share of prescription opioids from the ED was modest and declined through the study period, from 7.4 percent in 1996 to 4.4 percent in 2012. In comparison, the proportion of opioids from office-based prescriptions was high and increased, from 71 percent of the total to 83 percent. These results suggest policies and programs to reduce the quantity of opioids prescribed may have a greater impact in office-based settings. Instead the authors suggest EDs “could focus on developing and disseminating tools to help providers identify high-risk individuals and refer them to treatment.” Full study here.

Open enrollment periods (OEPs) have long been thought to serve an integral role in preventing adverse selection in the private insurance market resulting from enrollees switching plans due to a change in health status. However, a recent study examining a major 2012 reform to Medicare that allowed enrollees to switch to a 5-star plan at any time did not send Medicare’s Part C and D plans into an “adverse selection death spiral” as many expected. Although midyear switches to 5-star plans increased by 7 to 16 percent after the reform was implemented, the authors determined that the enrollees who were switching to the 5-star plans were “advantageously selected” and made the 5-star risk pool healthier. This study highlights the need to further study the determinants of plan choice in addition to casting doubts on the necessity of OEPs. Full study here. 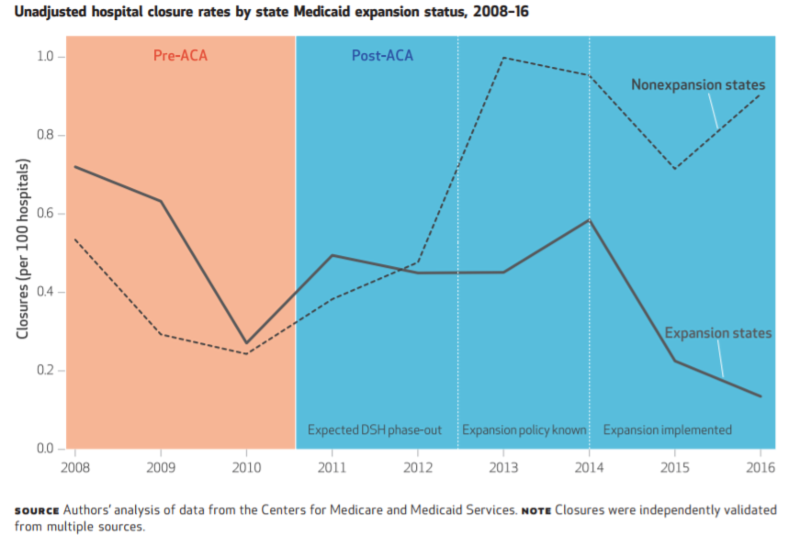 “States that did not expand Medicaid not only lost out on an opportunity to improve hospital financial circumstances, but they undermined hospitals that faced reduced DSH payments without the reduced uncompensated care that the reduction was designed to offset.”

Researchers and policymakers have speculated that the ACA Medicaid Expansion may have a positive effect on the financial viability of hospitals in states that expanded their Medicaid programs because of the resulting decrease in uncompensated care. An analysis of hospitals’ financial performance and closure rates from 2008 through 2016 found that states that did not expand their Medicaid programs experienced an increase of 0.43 closures per 100 hospitals between 2008-2012 and 2015-2016, whereas the hospital closure rate in states that did expand Medicaid decreased during the same period, by 0.33 per 100 hospitals. All in all, the researchers found hospitals in expansion states were about 84 percent less likely to close compared to hospitals in states that did not expand. This relationship between hospital closures and Medicaid Expansion was stronger for hospitals in rural markets and counties with large numbers of uninsured adults prior to the Medicaid expansion.  As policymakers continue to discuss changes to the financing of Medicaid and other public programs, these findings shed light on the implications of funding changes for hospitals, the closures of which could affect access to care as well as the local economy. Full study here.

Increasing access to primary care for uninsured individuals is a commonly proposed method of countering the rising cost of healthcare in America. In a new study, researchers conducted a randomized control trial with low-income, uninsured individuals to determine whether cash incentives were effective in encouraging individuals to visit a primary care provider (PCP), decreasing emergency department (ED) utilization, and lowering total health care utilization spending. The researchers found that while cash incentives were an effective tool for establishing a relationship between a patient and a PCP and promoting lower ED utilization, total spending was not decreased during the twelve-month study period because the patients who visited a PCP were also more likely to receive other outpatient visits, such as specialty care. This study indicates that increasing access to primary care may lead to better treatment and care coordination for individual patients, but will not provide substantial decreases in health care spending and utilization-at least in the short-term. Full study here.

Stephanie Hedt is the Policy Communications Editor at the Schaeffer Center