USC Presidential Professor and Nobel laureate Sir Angus Deaton testified before the Joint Economic Committee of the US Congress on economics and the opioid crisis on June 8, 2017.

Deaton testified on the decline in life expectancy in the United States and the role opioids have played in this startling trend.  His groundbreaking research with colleague Anne Case documented a rise in mortality and morbidity among middle-aged white non-Hispanics due to what they refer to as “deaths of despair.”

In his testimony, Deaton pointed to trends in the all-cause mortality rates for the 45-54 age group of white non-Hispanics in the United States compared to mortality rates for selected comparison countries between 1990 and 2015 as evidence of a devastating trend that is currently underway. The mortality rates in midlife in the comparison countries continue to decline at the rates that were standard in the US prior to 1998 whereas the US has seen rates substantially increase.  Deaton explains, “This turnaround in the US is driven by the opioid epidemic, by suicides, by cirrhosis, and by the slowing (and recent reversals) in the decline in heart disease. People are killing themselves by drinking, by accidentally overdosing, by overeating, or much more quickly, by committing suicide directly.” 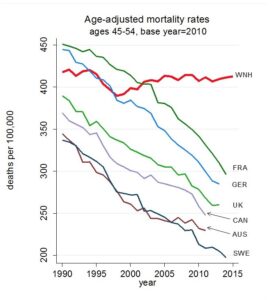 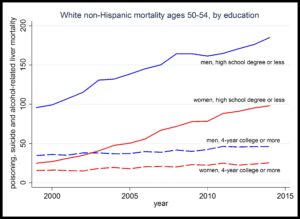 He notes these deaths of despair have risen in parallel for white non-Hispanic men and women.  The key distinction is education—those with and without a college degree. However, the trend cannot be explained simply by the economy. According to Deaton, “they were increasing before the Great Recession, and continued to increase afterwards.”

Though opioids may have a legitimate if limited role in treating pain, he says, they are a big part of this story. “We think of opioids, not as the fundamental cause of the epidemic of midlife mortality and morbidity, but as an accelerant, a set of drugs that added fuel to the fire, and made an already bad situation much worse,” he testified.