Schools and daycare centers closed around the country in March 2020 due to the COVID-19 pandemic, and childcare needs soared. At the same time, social distancing recommendations and stay-at-home orders have made it difficult, if not impossible, for informal care providers, such as grandparents or other family members, to help with child care responsibilities. This situation is challenging for people who work from home as well as for those who continue working outside the house. Women, especially working mothers, may face the brunt of the negative impacts. Women already carried a heavier load than men in the provision of child care before the crisis, and child care arrangements are crucial determinants of female labor supply. While the employment shock in the present crisis initially hit both genders, the COVID-19 public health crisis could have a major impact on women, especially on their career trajectories and the well-being of working mothers.

In our just-released working paper, we used data from the Understanding America Study–a nationally representative online panel of American households–collected approximately every two weeks from March 10th to July 21st, 2020, to study gender differences within households on the impact of the COVID-19 crisis. In particular, we compared how fathers and mothers of school-age children (K-12) are coping during this crisis in terms of child care provisions, employment, working arrangements, and psychological distress levels.

We find that the increased need for child care – caring for children and helping them with their homework and remote learning due to school and daycare closures – has put a strain on working parents of both genders. However, overall, we find that mothers have been carrying a heavier load on the provision of child care during this COVID-19 crisis than fathers. Moreover, mothers’ current working situations appear to have limited influence on their child care responsibilities.

In households with children, 44% of married or cohabitating women report being the sole provider of care for their children as compared to 14% of men. Even while currently working (shown in Figure 1), women are 27 percentage points more likely to be the only providers of child care than working men, and 41 percentage points less likely to report that their partner is the only provider of care. Not only do working mothers more often declare to be the only one providing care for their children, but they are also more likely to become the sole provider of care even if they were not at the beginning of the crisis. Among currently working parents who are married or living with a partner, women were 17 percentage points more likely than men to become the sole child care provider at some point between April and July 2020 in our U.S. sample.

Figure 1: “Who is Primarily Responsible for Providing Care When School is Closed?”- April 2020, Only Those Currently Working 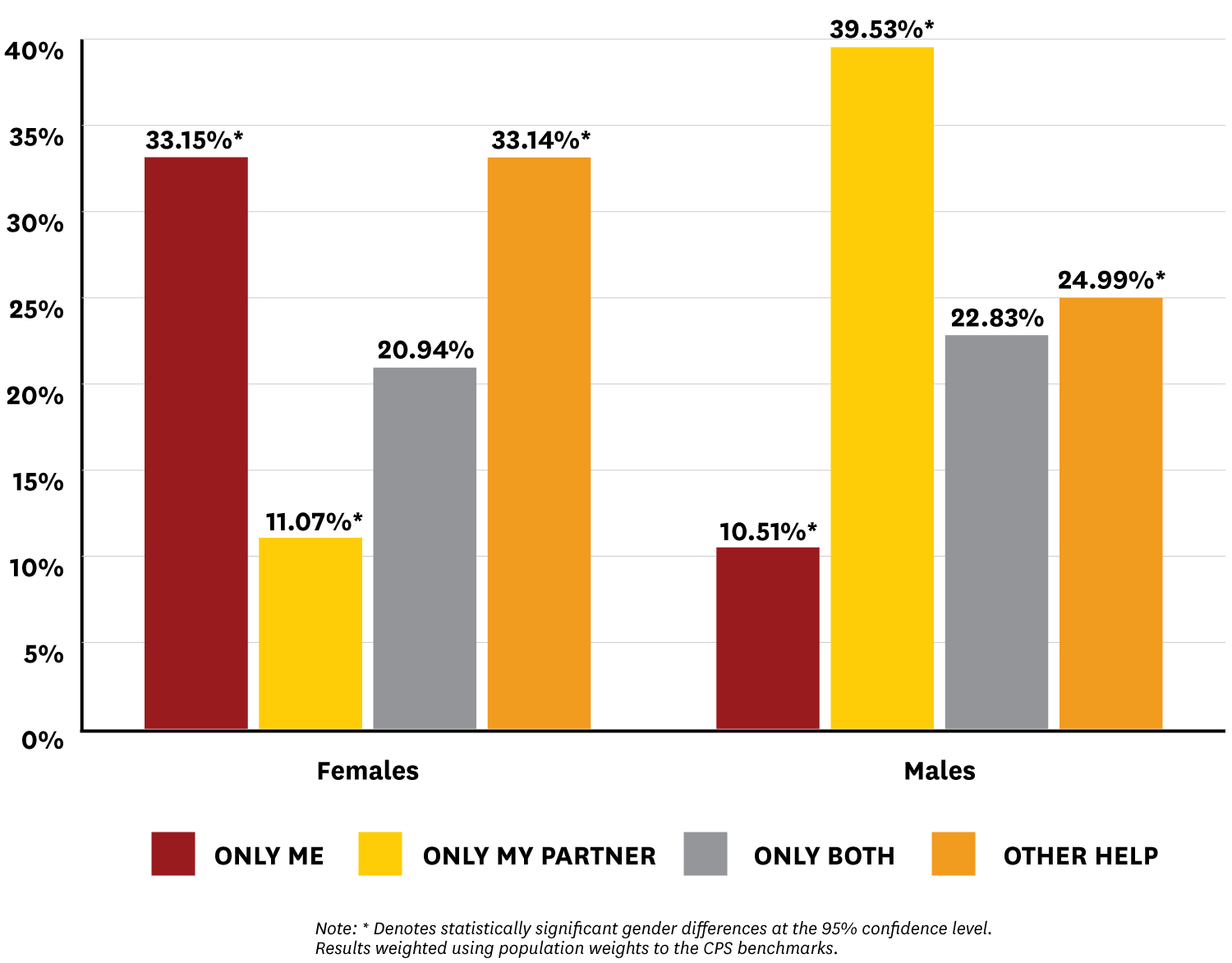 Other researchers have found related results. In the U.S., women spent more time taking care of children during March and April 2020, school closures affected the likelihood of mothers to have a job but not be working in April and May 2020, and mothers reduced their work hours more than fathers. Similar patterns have been found in other countries, like Spain and the U.K. (see here, here, and here).

In our own analysis of the Understanding American Study data, we also found that the effects of the crisis on gender differences in labor and mental health outcomes depend on whether or not there are children in the household. In our sample, 42% of working mothers reduced their working hours at some point between March and July 2020, as compared to 30% of working fathers. Overall, no statistically significant gender differences were observed on the proportion who reported reducing working hours among those without school-age children in the household.

Figure 2: Psychological Distress During the COVID-19 Crisis Among Those Married or Living Together, By Gender and Whether There Are School Age Kids in the Household 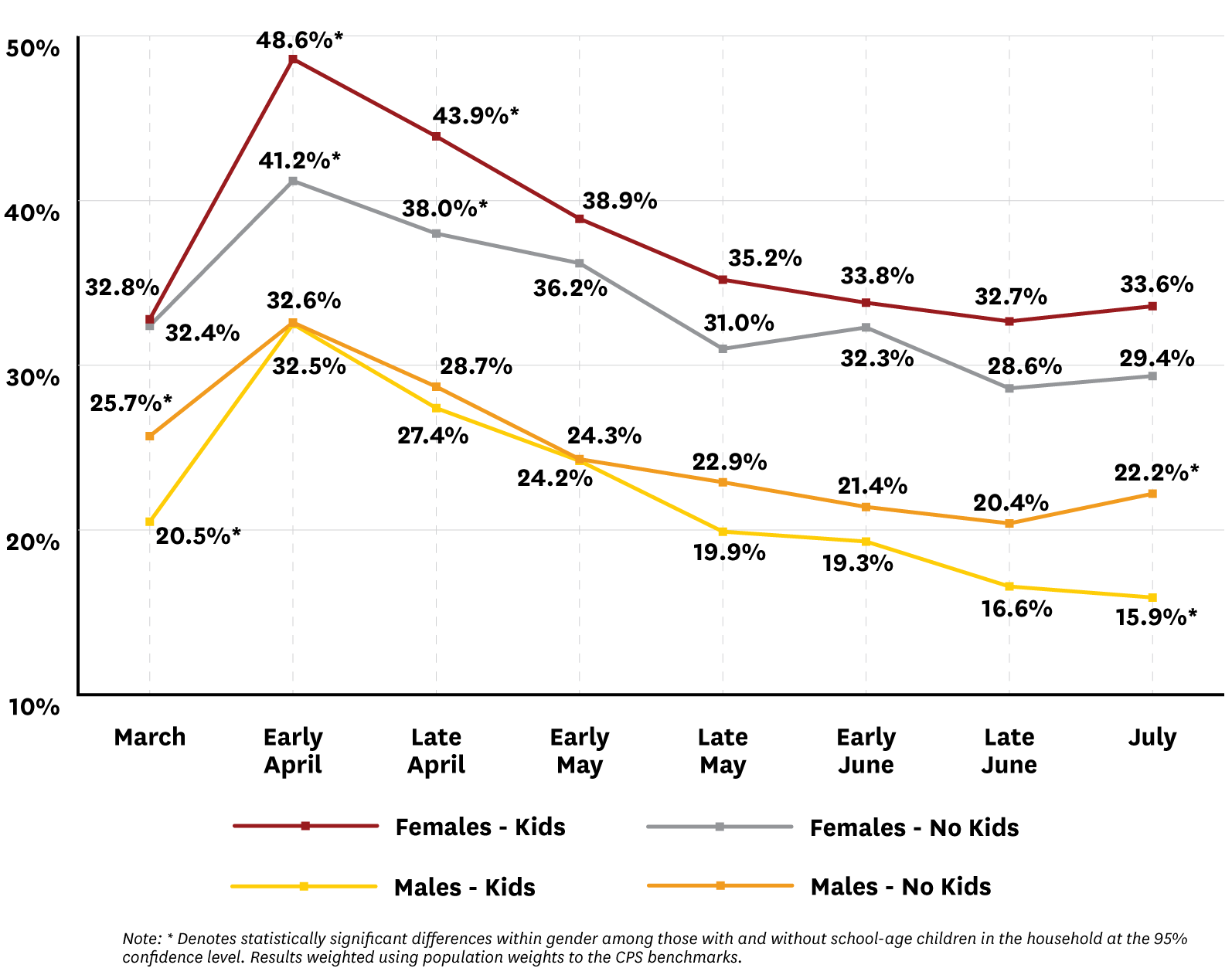 Parents in general have had to increase their hours caring for their children. But mothers were responsible for a disproportionate amount of housework and child care compared to fathers before the crisis, and the pattern remains during the pandemic. Mothers who continue working have new demands on their time during the pandemic, especially the mothers of young children. These additional tasks can put a strain on mothers’ time. We find evidence of that, as we see that mothers are more likely to reduce their hours worked and to suffer psychological distress. Our findings indicate that mothers continue to shoulder the bulk of the increased time demands, potentially at the expense of their work prospects. Given that there are high returns to experience, our findings suggest that women and their careers may bear the consequences of this crisis even after it is over. The facts we find raise concerns about the implications of this crisis for the evolution of the careers of American workers, particularly the mothers of young children.