Traditional and alternative medicine are ubiquitous. Forty percent of American adults use at least one form of alternative medicine.  The WHO reports that traditional medicine constitutes around half of health care utilization in China and up to 80 percent of utilization in Sub-Saharan Africa.  Because it is pervasive, traditional medicine may have large public health impacts throughout the world.

Traditional and Western medicine are based on distinct conceptions of health and disease.  Unani Tibb (“Greek Medicine” in Arabic) is a common traditional medical system in South Asia.  It dates to the eleventh century and is based on the teachings of Hippocrates and Galen. In this system, health requires balance between the four humors of blood, mucus, yellow bile, and black bile, as well as the four qualities of heat, cold, moisture, and dryness.  Illnesses arise through imbalances in these forces, and Unani treatments seek to restore balance.  Ayurveda and Traditional Chinese Medicine similarly invoke the concept of balance.

By contrast, Western medicine relies in part on the germ theory of disease, which states that invisible microorganisms cause many diseases. The germ theory is a recent discovery that only gained traction in the 1880s through the work of Louis Pasteur and others.  While we take this model as given, it is not at all self-evident that invisible microbes exist and can cause illness.  For those with limited exposure to science, a traditional model of disease may seem plausible, while the notion of infection by invisible microbes may seem fanciful. 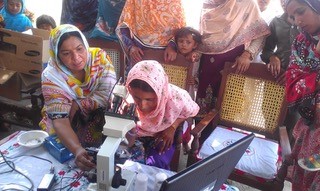 The substitutability of traditional and Western medicine is a critical public health question.  Someone who believes strongly in traditional medicine may be less receptive to Western medical recommendations. Why use condoms to prevent HIV if witchcraft causes AIDS? Why avoid air pollution with a facemask if herbs can purify and restore your body?  Moreover, since people have limited budgets, traditional medical expenditures may crowd out Western medical expenditures. Traditional medical beliefs may also moderate the impact of public health information campaigns. In a typical campaign, health workers from outside the community offer prescriptive messages about sanitation, HIV, and infant health care from a Western medical perspective.  The effectiveness of these campaigns is mixed, perhaps in part because message recipients do not always find the health messages credible.

My recent paper with collaborators Asjad Naqvi and Wolf-Peter Schmidt examined whether Unani medical beliefs moderate the impact of hygiene information in rural Pakistan.  In this region, diarrhea is a leading cause of infant and child mortality and hygiene and sanitation are lacking.  There is a stark distinction between the Unani and Western approaches to diarrhea.  Unani medicine classifies diarrhea as a “hot” illness (a designation that is unrelated to physical temperature) and recommends that people restore balance by avoiding hot liquids and foods.  Since a mother has “hot” breast milk if she has been working in the fields, some Unani providers recommend withholding breast milk from infants with diarrhea.  This prescription directly contradicts the proven Western approach of oral rehydration therapy.

We evaluated a hygiene information intervention called Microbe Literacy.  This program provides basic hygiene education to participants in adult literacy classes.  To make their messages more credible, facilitators first used microscopes to show participants everyday bacteria from their environment.  We find that this innovative step increased the impact of subsequent hygiene messages, and that the program had meaningful and statistically significant impacts on hygiene and child health, even 16 months later.

However the intervention was entirely ineffective for an important subgroup.  We created an index of Unani medical adherence according to respondents’ baseline beliefs.  Next we divided the sample and found an inverse relationship between the strength of Unani beliefs and the impact of the intervention.  People with weak beliefs showed a strong and significant response; those with strong beliefs barely responded at all.  Recognizing that Unani beliefs could be correlated with many other characteristics, we controlled for a battery of demographic and socioeconomic covariates but could not knock out the result.  This pattern suggests that in this context, Unani medical beliefs interfere with learning about hygiene.

I acknowledge that this finding only covers one health behavior (hygiene) in one context (rural Pakistan), and that the relationship between traditional and Western medicine may vary.  However there is almost no research that examines traditional-Western medical crowd out, regardless of the context. The extent of substitution surely depends on the illness, the traditional medical system, and other contextual factors.  This is a key topic in public health, and further work in this area is warranted.   Proponents of Western medicine should recognize that people may not always accept messages related to the germ theory at face value and take proactive steps to overcome skepticism in the community.