Progress against Alzheimer’s disease and related dementias remains slow. Currently, an estimated 5.8 million Americans are living with Alzheimer’s or dementia, or one in 10 people age 65 and older.[1] By 2050 that statistic is expected to climb to 14 million Americans.[1] Alzheimer’s disease is rapidly overwhelming our older population, their caregivers and families, and the entire healthcare system—yet even as the crisis worsens, no new treatments have entered the global market since 2003.[2]

Randomized clinical trials are a cornerstone of the drug-development process, but clinical trials—which account for the vast majority of costs and time in any drug development processes—are an especially tall hurdle for Alzheimer’s drug development. In fact, Alzheimer’s trials are slower to enroll participants, take longer—years, not months—to complete, and are more expensive than trials in other therapeutic areas. Screening procedures are expensive and time-consuming, and a large share of potential participants fail the screening criteria due to necessary restrictive eligibility criteria. The naturally slow progression of Alzheimer’s disease also contributes to long timelines, as well as the limited consensus on measures of effectiveness [5] required to demonstrate a treatment’s ability to prevent or slow disease progression.

Currently, approximately 99% of potential participants are never referred to or consider participating in Alzheimer’s clinical trials that might bring us closer to effectively preventing or treating the disease. To be effective, new approaches to Alzheimer’s trials must surmount barriers to participation and bring as many people as possible into the Alzheimer’s clinical-trial ecosystem. To understand these barriers and develop a strategy for surmounting them, our colleagues surveyed and interviewed nearly 900 Alzheimer’s disease stakeholders, including clinical trial personnel, patients, caregivers, and physicians. 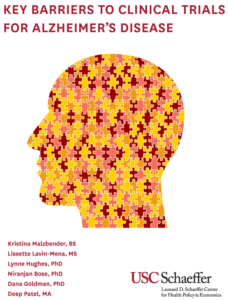 Along the Alzheimer’s disease continuum,[6] distinct approaches to improving participant identification, recruitment, enrollment and retention could be used. The innovations with the greatest potential to funnel as many people as possible toward Alzheimer’s clinical trials would increase awareness of the disease—especially early Alzheimer’s—among the public, equip healthcare providers and researchers with effective and efficient biomarkers and cognitive assessment tools, and facilitate participant awareness of, referral to, and retention in clinical trials.

The lack of diverse representation of participants with regards to varied race, ethnicities, sex, or educational backgrounds further limits Alzheimer’s clinical trials. Researchers are increasingly seeking solutions to overcome the underrepresentation of diverse participants, many of whom are at higher risk for dementia. New approaches and collaborations are needed to remove barriers to minority recruitment and increase participation of diverse populations—for example, taking time off from work represents an especially difficult barrier for participants and their families from underrepresented communities.

The COVID-19 pandemic has affected clinical trials across the world, including Alzheimer’s trials, and has created a new set of challenges. In the age of COVID-19, clinical trials have had to adapt to remote cognitive assessments, in-home infusions, and remote blood collection. But the pandemic is accelerating the digital transformation of Alzheimer’s clinical trials and providing an opportunity to implement simpler protocols, remote-site monitoring and data collection, digitized study procedures, and digital participant engagement in the future.

Barriers to clinical trial participation can be overcome, but the Alzheimer’s research community—including patient organizations, researchers, government, and innovators—must work together to address this immense public health challenge and find effective ways to prevent or treat Alzheimer’s disease.