As the COVID-19 crisis has spread across the United States, many worry that vulnerable populations could suffer disproportionately and have less ability to follow safety measures. Even in the past few weeks, many states have experienced a spike in applications for social assistance, as evidenced by the record-setting 3.3 million Americans who applied for unemployment the week of March 16.

Using data from the Understanding America Study, an ongoing internet-based national survey conducted by the USC Dornsife Center for Economic and Social Research, we are tracking how different socioeconomic groups are perceiving and responding to the spread of COVID-19. We will be using these analyses to identify and describe the challenges of those in need, and to spotlight opportunities to protect their safety, public health, and the economy.

Perceived Risk of Exposure
We find that Americans’ perceived risk of exposure to COVID-19 varies greatly by their age, education, and income bracket. Those who live in households in the highest income bracket feel they are 1.5 times as likely to contract to COVID-19, as compared to those in the lowest income brackets. We see a similar relationship with education; those with college and post-college degrees report a significantly higher risk of exposure, as compared to those in the lower education brackets. Interestingly, despite a focus on the impact of COVID-19 on older generations, younger people report a much higher perceived risk of exposure to COVID-19. Age groups that actually face the worst health outcomes – those in their 60’s, 70’s, and beyond – report less perceived chance of infection. 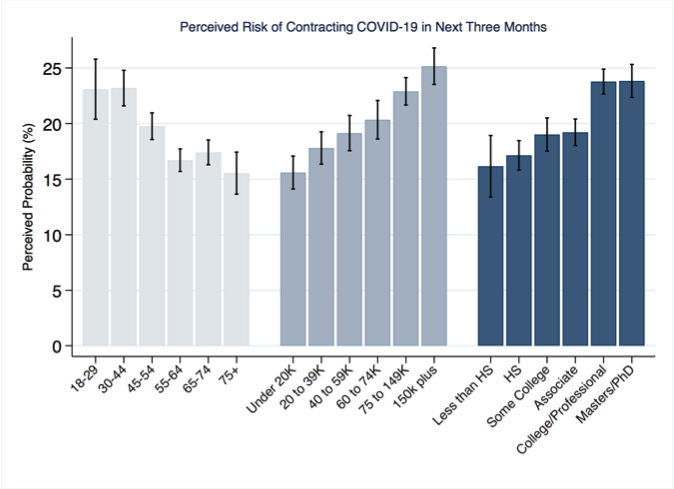 Perceived Risk of Death
The perceived risk of death due to COVID-19 is an inverse picture of the perceived risk of contracting the virus. On average, Americans over 75 believe they have a one in four chance of dying from COVID-19, the highest perceived risk among any of the groups. The socioeconomically vulnerable also report higher risk: households earning less than $39,000/year and individuals with no college education perceive similar mortality risk as those aged 65-74. We see the lowest perceived risks among the most educated and the highest paid. 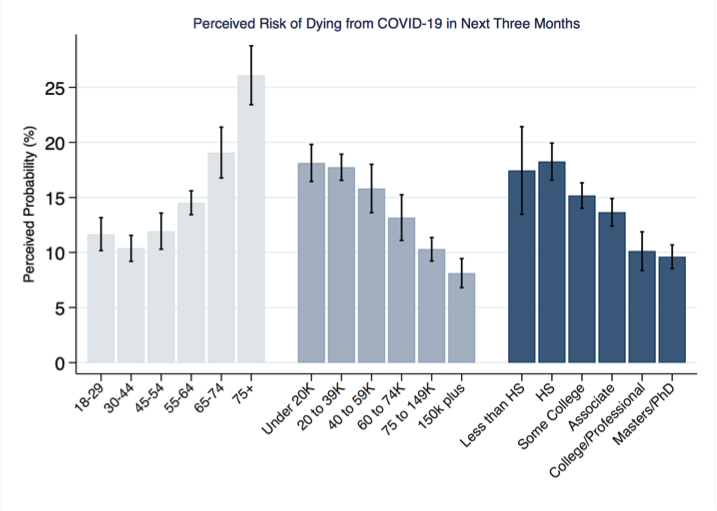 Perceived Financial Risk
Perceived financial risk also varies greatly by socioeconomic status. Americans in the lowest income brackets report a nearly four times higher risk of running out of money in the next three months due to the virus, as opposed to those in the highest income brackets. We see similar differences by education level. Older individuals are much less worried about financial loss, which could reflect their access to government benefits like Social Security. 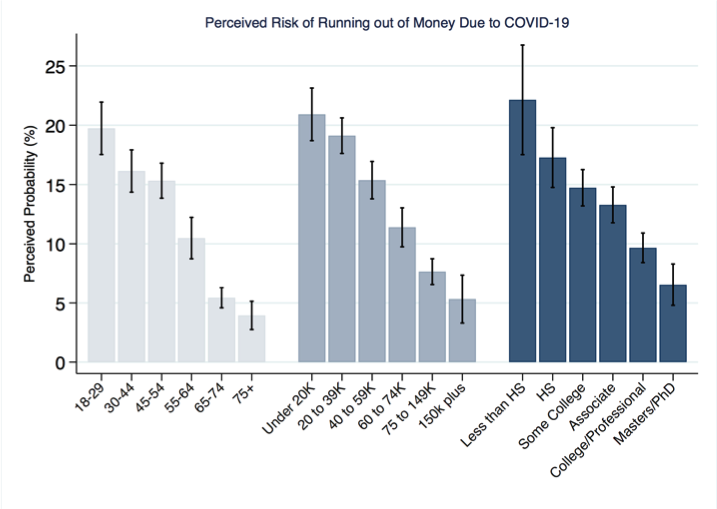 Behaviors
In order to understand how individuals are reacting to their perceived health and financial risks due to COVID-19, we examine how both general social distancing and work-related distancing behaviors (like working from home) vary across the demographic groups. For this analysis, we have separated out those with PhDs from those with master’s degrees and look at the number of social distancing behaviors (out of a maximum of 4) and work-related avoidance behaviors (out of a maximum of 3) people report engaging in. 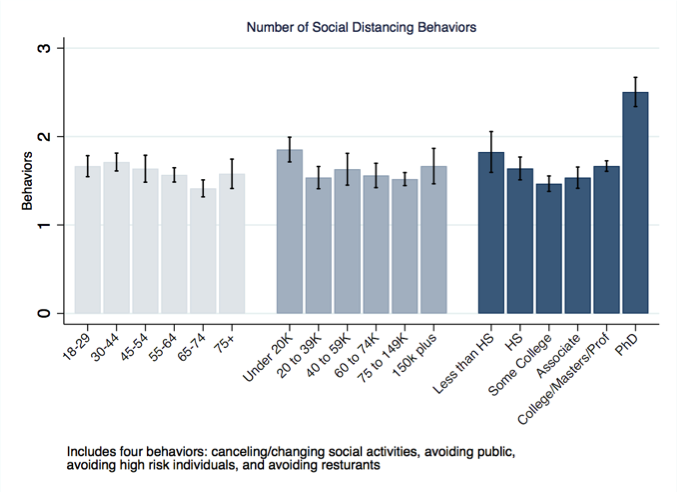 Despite the stark variation in perceived risk and vulnerability, social distancing behavior is remarkably consistent across groups, with most people adopting less than half of the distancing behaviors we measured. The only exception is PhDs, who report adopting significantly more preventative behaviors. Of the four social distancing behaviors, the two most commonly reported were avoiding contact with high-risk individuals and avoiding public spaces, with 52.0 percent and 48.9 percent of Americans practicing these behaviors in the past seven days, respectively. The highly educated — and to a lesser extent richest Americans — also report engaging in more work related avoidance; this could reflect differences across groups in terms of job flexibility. Older individuals also report doing less work-related avoidance behavior, but this is likely due to the fact that fewer of these individuals are working. Of the three work-related avoidance behaviors, working or studying from home was the most commonly reported, with nearly one out of four (24.5 percent) of Americans reporting having done so in the past seven days. 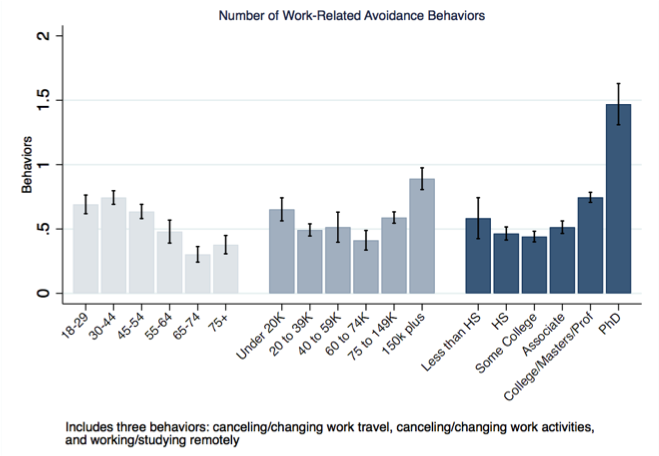 It is clear individuals in different socioeconomic groups are experiencing and reacting to the threat of COVID-19 differently. There is a simple explanation for some of what we see. For example, differences in perceived risk of exposure and death across age brackets may reflect the fact that Americans are aware of their relative risk. Younger individuals may fear they are more likely to be exposed while commuting or working, but feel they are less likely to die. On the other hand, those who are older and less likely to be working may have less exposure risk, but may experience worse health outcomes. Indeed, initial evidence suggests older individuals, and individuals with underlying medical conditions, may experience more severe symptoms and experience (Centers for Disease Control and Prevention).

The ways perceived risks translate into behavior is less straightforward. The heightened perceived risk of financial loss due to COVID-19 is highest among those with the lowest incomes/education. These groups also report the highest perceived risk of death, yet avoidance behaviors are remarkably stable across income and education groups, with the exception of the very highly educated. One explanation is that this reflects differing abilities to socially isolate or switch to remote work. Another hypothesis is that the increased worry about dying and financial ruin due to COVID-19 reflects inequities in American’s access to quality healthcare. We hope to delve deeper into this hypothesis in future analyses.

As we adapt and states make decisions on how to address health and economic fallout from COVID-19, it is imperative to consider those who are not only likely to experience higher risk of death and suffering, such as the elderly and those with underlying conditions, but also those who are economically vulnerable. Protecting the health, both physical and financial, of all Americans, regardless of age, job, and socioeconomic status, is essential to collective survival through this crisis.

More about the Understanding America Study

Calculations were based on a national survey of 5,400+ Americans conducted as part of the Understanding America Study at USC Dornsife Center for Economic and Social Research. The survey is a probability-based internet panel conducted March 10–16, 2020.