Cancer deaths are down nearly 30% over the last three decades. Some of the progress is due to public health advances, like reductions in smoking. But it also reflects therapeutic advances that take advantage of an evolving molecular understanding of the disease.

Yet cancer remains the nation’s second most deadly disease, accounting for perhaps 600,000 deaths this year alone. Worrisome disparities by race and socioeconomic status persist.  Black Americans and rural residents are more likely to be diagnosed with cancer at advanced stages and die from the disease. In America today, the color of one’s skin and where one lives are important predictors of cancer outcomes.

These challenges raise the question: could innovation in cancer screening narrow these persistent gaps? New evidence is emerging on blood-based multicancer tests that discover disease earlier and more broadly than current screening methods, and lead to diagnosis before it spreads.  A single blood test that detects scores of cancers at once could significantly improve population screening rates.

But will Medicare, Medicaid and private insurance be ready to pay for these novel blood tests? Will the infrastructure be in place to overcome persistent racial disparities that may inhibit access? Will general practitioners adopt these tests as a tool to find cancers early when they are most treatable? How do we ensure follow-up treatment for people testing positive is available and that those costs are covered? If used, will these tests be the potent new weapon that helps us finally win the long war against cancer?

Join the Health, Medicine and Society Program of the Aspen Institute and the USC Schaeffer Center for Health Policy & Economics for an expert webinar on new clinical advances in cancer screening and prevention and the policy issues surrounding access to and adoption of these advances by clinicians, payers, and public officials. 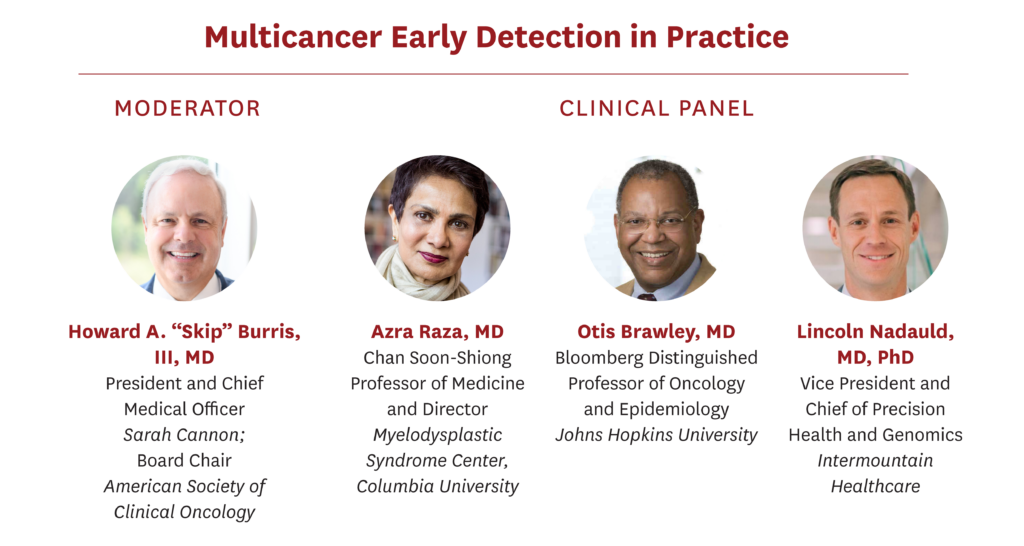 Dana Goldman, PhD, is the Interim Dean at the USC Sol Price School of Public Policy, as well as the Leonard D. Schaeffer Chair and Distinguished Professor of Pharmacy, Public Policy, and Economics at the University of Southern California. Goldman began serving in his new capacity as interim dean on July 1, 2020. One of his first initiatives is to establish the Price School Social Justice Advisory Board representing faculty, staff and students. He is an elected member of the National Academy of Medicine and the National Academy of Social Insurance – two of his field’s highest honors.   He is the author of more than 300 articles and book chapters, and his research has been published in leading medical, economic, health policy, and statistics journals.  He has raised over $100 million in funding from external sources—including more than $50 million from the National Institutes of Health. Goldman pioneered the “Netflix model” to improve access to prescription drugs and the value of reduced copayments for the chronically ill.  He served as a formal health policy advisor to the Congressional Budget Office, Covered California, National Institutes of Health, and the Fred Hutchinson Cancer Institute.  He serves on the editorial boards of Health Affairs and the American Journal of Managed Care and is founding editor of the Forum for Health Economics and Policy. His work has been featured in the New York Times, Wall Street Journal, Washington Post, The Economist, NBC Nightly News and other media.  He is former director of ISPOR and ASHEcon and a co-founder of Precision Health Economics, a health care consultancy.  Goldman received his B.A. summa cum laude from Cornell University and a Ph.D. in Economics from Stanford University.

Ruth Katz, JD, MPH, is a Vice President and the Executive Director of the Health, Medicine and Society (HMS) Program at the Aspen Institute, an educational and policy studies organization based in Washington, DC. Drawing on the nation’s sharpest leaders, intellects, and practitioners, HMS seeks out bold, creative, and practical solutions to the health and medicine challenges facing the United States in the 21st century.

Ms. Katz joined the Aspen Institute after serving from 2009 to 2013 as Chief Public Health Counsel (Democratic Staff) with the Committee on Energy and Commerce in the U.S. House of Representatives). The Committee has legislative jurisdiction over virtually every domestic health program, including Medicare, Medicaid, the National Institutes of Health (NIH), the Centers for Disease Control and Prevention (CDC), the Food and Drug Administration, and national health reform efforts. Ms. Katz was the lead Democratic committee staff on the public health components of the health reform initiative passed by the House of Representatives in November 2009. More>

Azra Raza, MD, is the Chan Soon-Shiong Professor of Medicine and Director of the MDS Center at Columbia University. A practicing oncologist seeing 30-40 cancer patients weekly, she also directs a basic cancer research lab with hundreds of original publications in high profile journals. She worked with President Clinton designing Breakthrough Developments in Science and Technology and with VP Joe Biden for the Cancer Moonshot initiative. Her latest book, THE FIRST CELL: And the human costs of pursuing cancer to the last was published in October 2019. Her life is devoted to early detection and prevention of cancer.

Howard A. "Skip" Burris III, MD, FASCO, FACP serves as president and chief medical officer of Sarah Cannon, as well as the executive director, drug development for Sarah Cannon Research Institute. He is an associate of Tennessee Oncology, PLLC, where he practices medical oncology.

Dr.Burris' clinical research career has focused on the development of new cancer agents with an emphasis on first-in-human therapies, having led the trials of many novel antibodies, small molecules, and chemotherapies now FDA approved. In 1997, he established in Nashville the first community-based early phase drug development program, which grew into the Sarah Cannon Research Institute. He has authored over 400 publications and 700 abstracts.

Dr. Burris served as president of ASCO in 2019-2020 and is serving as Chair of the Board for the 2020-2021 term. He also currently serves on the Board of ASCO’s Conquer Cancer Foundation. Additionally, in 2014, Dr. Burris was selected by his peers as a Giant of Cancer Care for his achievements in drug development.

Dr.Burris completed his undergraduate education at the United States Military Academy at West Point, his medical degree at the University of South Alabama, and his internal medicine residency and oncology fellowship at Brooke Army Medical Center in San Antonio. While in Texas, he also served as the Director of Clinical Research at The Institute for Drug Development of the Cancer Therapy and Research Center and The University of Texas Health Science Center. He attained the rank of lieutenant colonel in the US Army, and among his decorations, he was awarded a Meritorious Service Medal with oak leaf cluster for his service in Operation Joint Endeavor.

Otis W. Brawley, MD, MACP, FASCO, FACE is the Bloomberg Distinguished Professor of Oncology and Epidemiology at Johns Hopkins University. He is a board-certified medical oncologist and an epidemiologist. He is an authority on cancer screening and prevention and leads a broad research effort of cancer health disparities at the Johns Hopkins School of Medicine, Bloomberg School of Public Health and the Sidney Kimmel Comprehensive Cancer Center, focusing on how to close racial, economic, and social disparities in the prevention, detection, and treatment of cancer. From 2007 to 2018, Brawley was Chief Medical and Scientific Officer of the American Cancer Society. He is recipient of the U.S. Public Health Service (PHS) Meritorious Service Medal, the Department of Defense Distinguished Service Award and the 2019 American Medical Association Distinguished Service Award. He is also a member of the National Academy of Medicine.

Lincoln Nadauld, MD, PhD, founded the Intermountain Precision Genomics program with a vision of finding solutions to improve health and disease through genomics and precision medicine without increasing costs. With his vision in mind, he oversees the clinical implementation of precision genomics across Intermountain’s 24 hospitals and 160 physician clinics. In addition, he facilitates genomic research to better understand the human genome. Nadauld conceived of and is leading the recently announced Heredigene, Population Study—a collaborative effort with deCODE Genetics in Iceland to collect and perform whole-genome sequencing on 500,000 participants in the Intermountain system. Nadauld’s work in founding Intermountain Precision Genomics was recognized with the Utah Governor’s 32nd Annual Science Medal for Industry, which is the highest civilian award to be bestowed by the state of Utahandhonors significant contributions to science and technology. He is married with five children and enjoys attending their many activities and events, as well as water sports, fishing, and other athletic pursuits.

Darius Lakdawalla, PhD holds the Quintiles Chair in Pharmaceutical Development and Regulatory Innovation at USC, where he sits on the faculties of the USC Schaeffer Center, the USC School of Pharmacy and the USC Price School of Public Policy. He is a widely published, award-winning researcher, and a leading authority in both health economics and health policy.

Lakdawalla received his PhD in economics from the University of Chicago and his bachelor’s in mathematics and philosophy from Amherst College. His work has been published in leading journals of economics, medicine and health policy.

The majority of his career was with UnitedHealth Group. He was their Chief Medical Officer from 1991 to 2001 where he built the company’s medical management programs. He focused his later work on the development of performance measures and incentives for the improvement of clinical care. He returned in 2006 to lead an initiative combining clinical, financial and program management experts to focus on cancer care. This team was the first to complete an episode payment program for cancer treatment and it created the first commercial cancer database combining clinical and claims data.

Prior to his work at UnitedHealth Group Dr. Newcomer practiced medical oncology for nine years in Minneapolis and Tulsa, Oklahoma. He served as the Medical Director for Cigna Healthcare, in Kansas City and he was a founding executive of Vivius, a consumer-directed venture that allowed consumers to create their own personalized health plans.

He is a former Chairman of Park Nicollet Health Services (HealthPartners), an integrated system of physicians and hospitals based in Minnesota with national recognition for its leadership in quality, safety, and cost effectiveness. He is a director at Myriad Genetics, Cellworks and Intervention Insights.

Josh Ofman, MD, MSHS, is Chief Medical Officer and External Affairs at GRAIL. Josh also serves on the Board of Directors of Cell BT, Inc, an immuno-therapy company focused on the discovery and development of innovative cancer therapeutics. Previously, Josh spent more than 15 years at Amgen, where he most recently held the role of Senior Vice President, Global Health Policy. Prior to that, Josh was a faculty member in the Department of Medicine and Health Services Research at University of California, Los Angeles (UCLA) School of Medicine, Cedars-Sinai Medical Center, as well as Senior Vice President of Zynx Health Inc., a subsidiary of Cerner Corp. Josh holds a BA in history and philosophy of science from the University of California, Berkeley, and an MD from the University of California, Irvine, School of Medicine. Josh also has an MSHS from the UCLA School of Public Health.