The COVID-19 pandemic has fueled increasing concern about the state of Americans’ mental well-being. After two years of turmoil, many employers and universities are searching for innovative tools to strengthen and expand access to mental health services as they grapple with a mental health crisis among their staff and students.

The pandemic also ushered in the quick and widespread adoption of telemedicine and other digital health tools to keep patients and healthcare providers safe while continuing to offer services. These digital advances offer the promise of personalized and accessible care, but they also raise questions about disparities and privacy.

On June 2, join the Schaeffer Center and USC Sol Price School of Public Policy for a webinar that will address our nation’s mental health crisis, how it is affecting employers and schools, and the opportunities and challenges of digital health. USC Price School Dean and Schaeffer Center Co-Director Dana Goldman will host a conversation with Lyra Health CEO and Co-Founder David Ebersman. 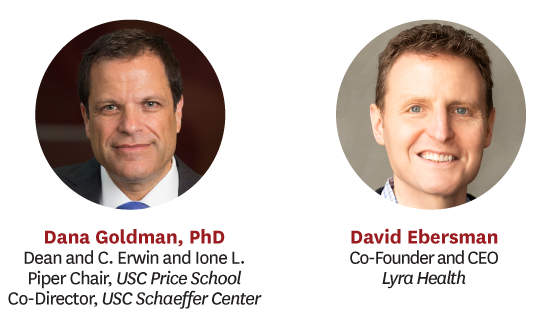 Dana Goldman, PhD (Moderator), is Co-Director of the USC Schaeffer Center for Health Policy & Economics, Dean and C. Erwin and Ione L. Piper Chair of the USC Sol Price School of Public Policy, and Distinguished Professor of Pharmacy, Public Policy, and Economics at the University of Southern California. He is a nonresident senior fellow at The Brookings Institution and research associate with the National Bureau for Economic Research. For the past 10 years, he has led USC’s Schaeffer Center for Health Policy and Economics, one of the nation’s premier health policy programs within the Price School of Public Policy and School of Pharmacy.

Goldman began serving in his new capacity as interim dean on July 1, 2020. One of his first initiatives is to establish the Price School Social Justice Advisory Board representing faculty, staff and students. This effort underscores the critical role of the school in bringing research and expertise to develop innovative solutions to the most entrenched injustices of our day.

Goldman is the author of approximately 300 articles and book chapters in medicine, health policy, economics, and statistics. He pioneered a “Netflix model” to improve access to prescription drugs and the value of reduced copayments for the chronically ill. He has served as a health policy advisor to the Congressional Budget Office, Covered California, Fred Hutchinson Cancer Institute, and National Institutes of Health. He is a founding editor of the Forum for Health Economics and Policy and serves on several editorial boards including Health Affairs and the American Journal of Managed Care. Goldman is a former director of the International Society for Pharmacoeconomics and Outcomes Research and the American Society of Health Economists. His research and opinion pieces have appeared in the New York Times, Wall Street Journal, Washington Post, Stat, Forbes, Business Week, U.S. News & World Report, The Economist, NBC Nightly News, PBS NewsHour, CNN, NPR, and other media.

Goldman is an elected member of the National Academy of Medicine and the National Academy of Social Insurance. In 2016, he was appointed a Distinguished Professor at the University of Southern California in honor of accomplishments bringing the University “special renown.”   He received the MetLife Foundation Silver Scholar Award in honor of his research to value healthy aging and medical innovations; the Eugene Garfield Economic Impact Prize, recognizing outstanding work demonstrating how medical research impacts the economy; the National Institute for Health Care Management Research Foundation award for excellence in health policy; and the Alice S. Hersh New Investigator Award recognizing contributions of a young scholar to health services research.

Goldman advises many companies in the life sciences industry. He was a co-founder of Precision Health Economics in 2006—a consultancy that provides analytic services to pharmaceutical, biological and health care companies—and currently serves as a scientific advisor. He also spent 15 years at the RAND Corporation, where he held the Distinguished Chair in Health Economics and served as director of its health economics program and the Bing Center.

David Ebersman is currently co-founder & CEO of Lyra Health, a health care technology company focused on behavioral health. Previously, David served as the Chief Financial Officer of Facebook from 2009 through 2014. Prior to joining Facebook, he worked in various positions at Genentech, a biotechnology company, from 1994 to 2009 including as its Executive Vice President and Chief Financial Officer, Senior Vice President, Product Operations, and Vice President, Product Development. Prior to joining Genentech, David was a research analyst at Oppenheimer, an investment bank. David is a member of the board of directors of Momentive. He holds an A.B. in International Relations and Economics from Brown University and was selected as a Henry Crown Fellow in 2000.