Editor’s Note:  This analysis is part of the USC-Brookings Schaeffer Initiative for Health Policy, which is a partnership between Economic Studies at Brookings and the University of Southern California Schaeffer Center for Health Policy & Economics. The Initiative aims to inform the national health care debate with rigorous, evidence-based analysis leading to practical recommendations using the collaborative strengths of USC and Brookings.

On November 10, the Supreme Court will hear oral argument in California v. Texas, the case in which the Trump Administration and a group of Attorneys General are challenging the constitutionality of the Affordable Care Act (ACA). If the Court strikes down the ACA in its entirety, 20 million people would lose health insurance, a variety of protections for people with pre-existing conditions would be eliminated, and an extensive set of policies affecting Medicare, Medicaid, prescriptions drugs, and other parts of the health care system would be reversed.  Significant attention has been paid to the policy changes that elimination of the ACA would bring when fully implemented, but there has been more limited analysis of how health care stakeholders would cope with the sudden elimination of myriad ACA provisions in the short-term. This piece considers some of the major changes (outside the private insurance market) that would follow in the wake of Supreme Court decision eliminating the ACA and concludes that implementation is likely to be quite chaotic. While Congress could in theory ameliorate some of this chaos by quickly enacting legislation, the political trajectory of the ACA to-date does little to inspire confidence that such action would be forthcoming.

Figure 1 summarizes some of the questions that would drive uncertainty, and each of these issues is described in more detail below. 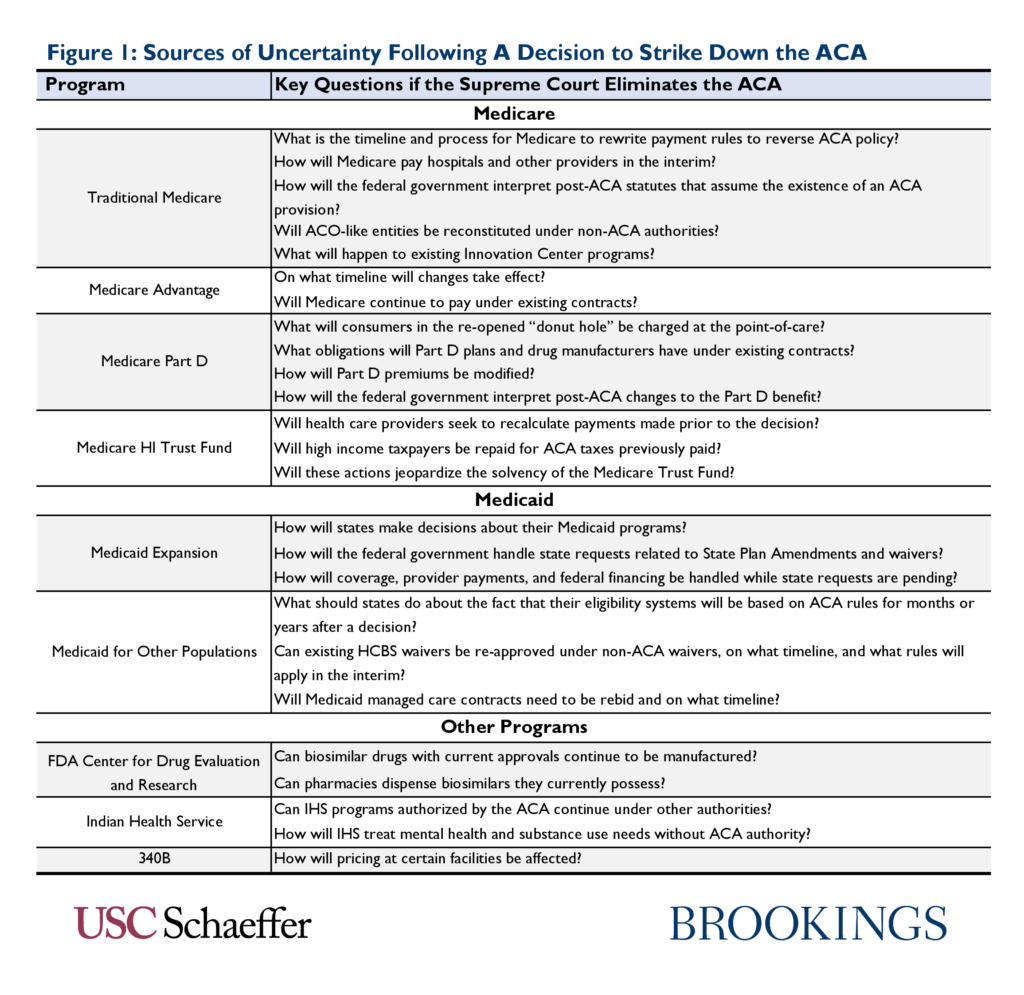 The ACA made many changes to Medicare, generally designed to reduce unnecessary spending and improve quality of care.  Those new rules are fully “baked in” to Medicare’s policies for making $800 billion in annual payments.  In many instances turning off these ACA provisions would not be straightforward and would require the federal government to conduct a careful legal analysis to understand what the statute requires once the ACA provision is removed. This undertaking would be particularly complex in instances where Congress has passed legislation since 2010 that either amended or presupposed the existence of an ACA provision. It would often raise novel questions of statutory interpretation, which would likely spur additional litigation given the financial stakes involved. These problems would play out in a range of concrete settings:

The ACA also made a wide variety of changes to Medicaid, a program which covers 75 million people and whose importance has grown during the COVID-19 pandemic.  Striking down the ACA would eliminate the Medicaid expansion, which would be a complex undertaking, and require states, providers, and beneficiaries to adapt to dozens of other changes in the program:

In the absence of federal funding, states will need to make decisions about the future of eligibility, and they will be making those decisions in an already difficult budget climate.  State legislatures may need to reconvene, and the 39 states with expansions would need to file State Plan Amendments, waiver amendments, or new waivers with the federal government.  As state and federal officials worked through this unusual process to unwind expansion, it is unclear if individuals would continue to have coverage and if providers would continue to be paid while changes were pending – and how the federal government would contribute.

Sources of Uncertainty in Other Programs

Across the health care sector, payers, providers manufacturers and other organizations would face uncertainty on a range of important questions particular to their programs. Some of those issues include: