Healthcare spending is high and rising, making it one of the most pressing challenges for consumers and policymakers alike.  Sustained innovation in healthcare remains a key issue as well.  Yet viable policy solutions are often prioritized according to their anticipated ability to improve affordability or encourage innovation without understanding there are ways in which both goals can be achieved.

Health technology assessment (HTA) is a tool that, when conducted effectively, can provide critical input for decision makers about price and value, while also recognizing the contribution of innovation to advancing health and healthcare. But in the U.S., HTAs are performed by a network of uncoordinated, privately funded actors.  Evidence varies in quality and tends to focus on patent-protected healthcare technologies, often overlooking unpatented procedures and technologies. 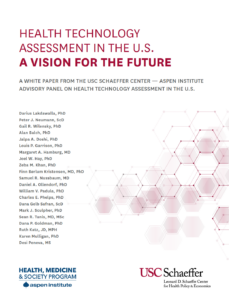 To address these deficiencies, the USC Schaeffer Center for Health Policy & Economics and the Aspen Institute’s Health, Medicine & Society Program convened a year-long advisory panel to ascertain and recommend how HTA could be improved within the U.S healthcare system to better link the price of innovations to the benefits they provide for individuals and society.  Chaired by Darius Lakdawalla, Peter Neumann and Gail Wilensky, the panel includes 19 experts from academia, patient advocacy, government and industry.  Three of the panelists are international experts from countries that have publicly funded HTA entities.

Most ambitiously, the panel recommends establishing an HTA coordinating body that would be publicly funded – the Institute for Health Technology Assessment (IHTA).  The IHTA would evaluate existing HTA data where it exists, identify gaps in knowledge, engage in data collection and management, and advance research methods.  For health interventions that are poorly studied by existing literature, it would also provide funding for assessments.

In contrast to other high resource nations, payers in the U.S. rely almost exclusively on privately funded HTAs for guidance in determining coverage and negotiating prices.  And because the focus is usually on the here and now, these efforts generally target new technologies and drugs, neglecting value assessments of public health interventions, surgeries, processes of care and other important aspects of health and healthcare. Moreover, under the current structure, payers have no incentive to consider the full value of a technology or intervention perceived by consumers.

These gaps would be filled by the IHTA.

“An independent, nonpartisan coordinating body could help make sense of conflicting studies and fill gaps in the evidence for technologies that have been overlooked by existing research,” said Wilensky, an economist and senior fellow at Project HOPE.

“It is an opportune time, both from a healthcare and political lens, to put forward these recommendations and have a discussion about developing a coordinating body,” added Neumann,  who directs the Center for the Evaluation of Value and Risk in Health at the Institute for Clinical Research and Health Policy Studies at Tufts Medical Center.

While that recognition is welcome, the panel members believe that is not enough.  To take full advantage of the HTA concept, the U.S. must develop its own HTA approach that takes into account the unique features of the U.S. healthcare system, including not only pricing for drugs, but also for hospital and physician services, which account for the majority of U.S. healthcare spending.

Recommendations from the Panel

The panel developed a set of six recommendations that, when taken together, will strengthen the HTA landscape:

“If fully implemented, these recommendations can have a direct and meaningful impact on how our precious healthcare dollars are allocated and spent,” said Ruth Katz, vice president, and executive director of the Health, Medicine & Society Program at Aspen.  “We are delighted to have partnered with the Schaeffer Center in developing this proposal and look forward to sharing it with policymakers and other key stakeholders.”

Funding for this paper was provided by the USC Schaeffer Center.  The Schaeffer Center and Aspen Institute will hold a forum to discuss these recommendations later in the year.  Lakdawalla, Neumann, and Wilensky will also participate in a spotlight session at the 2021 Annual ISPOR Conference.