A national USC survey also reveals the vast majority of Americans recognize the value of hand washing and sanitizing to keep themselves safe from infection.

As the rate of COVID-19 infections in the U.S. continues to grow, slightly more than a quarter of all U.S. residents believe they have a near zero chance of becoming infected and 92% of people have received the message that hand washing and sanitizing are effective safety measures.

The findings are from data released from an ongoing national survey of 5,414 adult residents of the U.S. regarding perceptions and attitudes related to the novel coronavirus, conducted March 10 – 16 by researchers at the USC Dornsife Center for Economic and Social Research and the USC Schaeffer Center for Health Policy and Economics.

The researchers hope to ask survey respondents the same questions at periodic intervals throughout the duration of the pandemic to track how their lives and beliefs have changed.

The study was led by USC professors Daniel Bennett and Wändi Bruine de Bruin with the goal of helping public health and policy leaders identify gaps in information and understand how the virus has affected everyday life.

Will I Get Infected?

Thirteen percent of Americans believe they’ve got a 50-60 percent chance of getting the virus in the next three months, while only 6 percent rated their odds of infection at being greater than 60 percent.

“We’ve been collecting this data during a week of rising infection rates, breaking news related to COVID-19 and new official recommendations. Even during this week, we’ve already recorded shifts in perceptions,” said Bennett, an economist at the USC Dornsife Center for Economic and Social Research. “Our survey offers a valuable baseline for future analysis.” 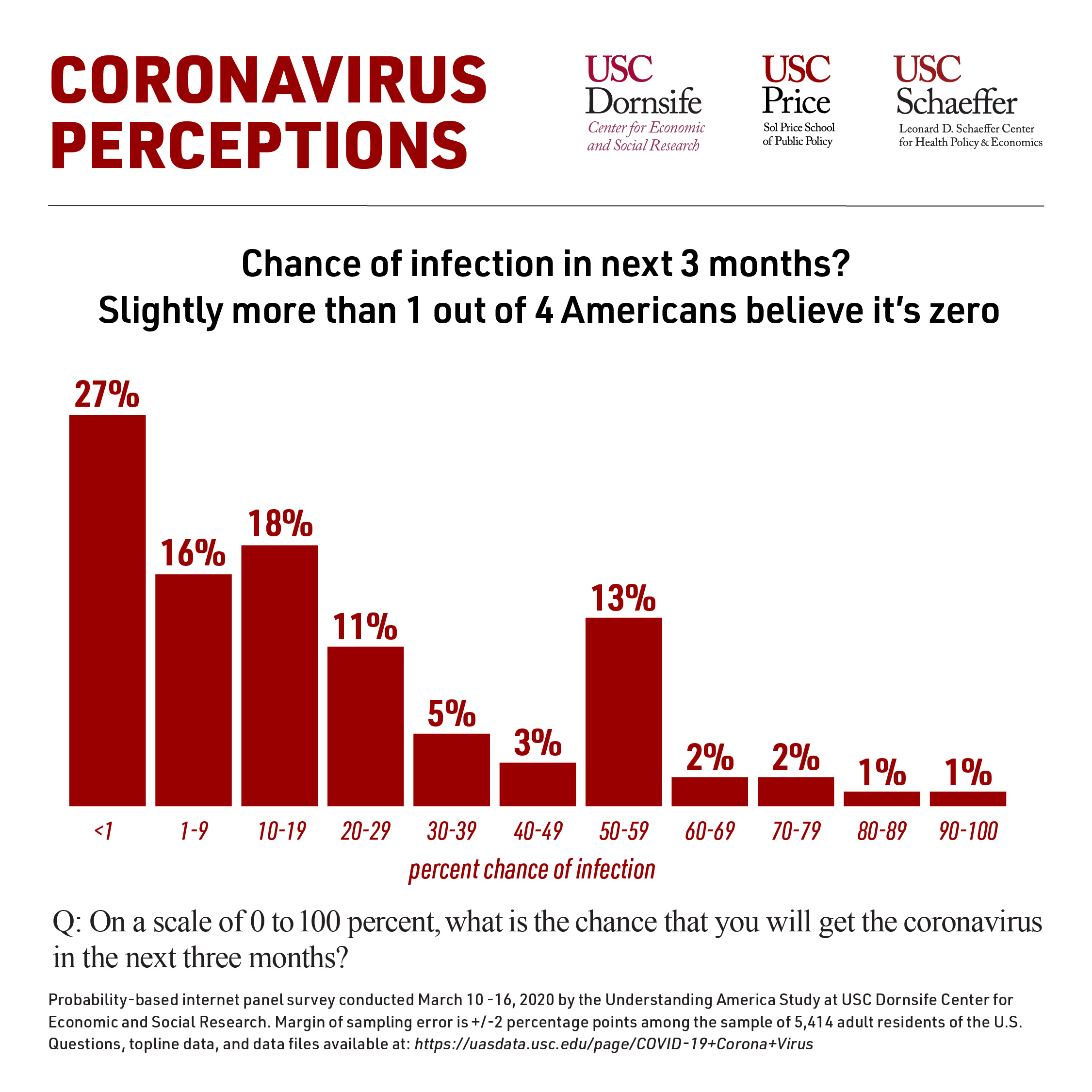 Bennett, Bruine de Bruin and colleagues have shared further analyses on The Evidence Base blog, a collaboration between the USC Schaeffer Center and the USC Dornsife Center for Economic and Social Research.

Roughly 85 percent cited the value of avoiding airplanes and public spaces/crowds as being effective safety measures.

Nearly 8 out of 10 said that seeing a doctor when feeling sick is an effective safety measure, while 50 percent cited prayer as somewhat (17 percent) or extremely (33 percent) effective.

“Although there might initially have been uncertainty about effective safety precautions, people seem to be getting the message to step up their hand hygiene and implement social distancing measures,” said Bruine de Bruin, provost professor of public policy, psychology, and behavioral sciences with the USC Schaeffer Center for Health Policy and Economics. “As news developed over the week the survey was in the field, we actually saw an uptick in the percentage of people who recognized the effectiveness of important safety measures.”

Effectiveness of Hand Washing and Sanitizing 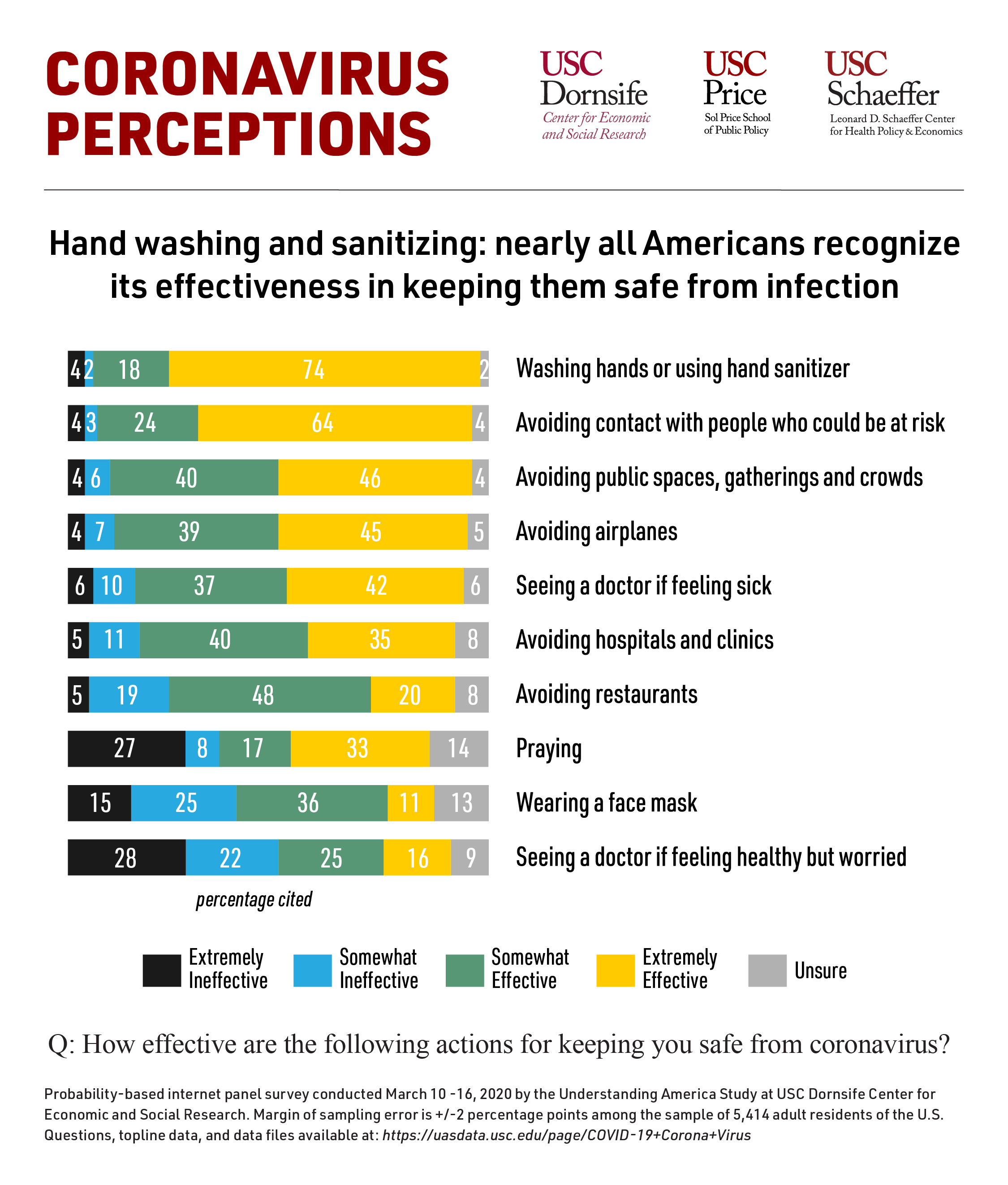 The wide-ranging survey also asked respondents about how likely it is the coronavirus will cause them to: be quarantined, lose their job, and run out of money. Among other questions, it also asked whether people experienced symptoms, whether they would take a vaccine, and their belief regarding the likelihood that people who become infected will die.

The Understanding America Study is making the data immediately available to other researchers who are studying the public’s responses to the pandemic.

The probability-based internet panel survey was conducted March 10-16, 2020 by the Understanding America Study at USC Dornsife Center for Economic and Social Research. The margin of sampling error is +/- 2 percentage points among the sample of 5,414 adult residents of the U.S.

The survey questions, topline data, and data files are available at: https://uasdata.usc.edu/index.php.