With biologic drugs constituting the fastest-growing category of pharmaceutical spending, biosimilar drugs — which duplicate the clinical effectiveness of biologics — have the potential to lower prices and produce savings for patients and payers. Yet, while biosimilars have gained traction in European countries, the market in the United States has been slower to develop.

“The biosimilar market in the U.S. is growing, but some are worried that things are moving too slowly,” says Van Nuys, executive director of the Value of Life Sciences Innovation Project at the USC Schaeffer Center. “We wanted to illuminate some of the dynamics in the market that might explain the speed of adoption.”

The researchers focused on physicians who prescribed filgrastim in its biologic form, Neupogen, and its biosimilar, Zarxio, to treat patients who lack certain white blood cells due to chemotherapy and other conditions. They selected Zarxio because, as the nation’s first approved biosimilar, it was the only one in use long enough to generate usable data.

In reviewing the claims information of approximately 9 million commercial insurees and Medicare Advantage members, as well as data on the average sales price of Zarxio and Neupogen, the authors looked at whether the provider was an office-based physician or worked in an outpatient hospital. Then they examined trends among providers who administered only the biologic, only the biosimilar or both.

“Once the drug is approved, providers play a significant role in whether a biologic or biosimilar is prescribed in the U.S. For example, unlike the brand/generic market, pharmacists can’t substitute one for the other,” explains Chen, an assistant professor at the USC Price School of Public Policy. “Studying differences in prescribing patterns across various provider types can offer important insights about what policies can be employed to expand the market.”

Other factors studied included patient demographics and whether claims were made to an HMO. The investigators also controlled for geography to determine if factors unique to certain regions — such as differences in rebates and discounts between states as well as disease prevalence in diverse populations — could explain any variations in biosimilar uptake.

The data showed that the use of the biosimilar Zarxio has grown steadily since its 2015 launch. After three years, its share of medical claims had risen to 60 percent among office-based physicians and 49 percent at outpatient hospitals. This rate was comparable to Zarxio adoption rates in Europe. 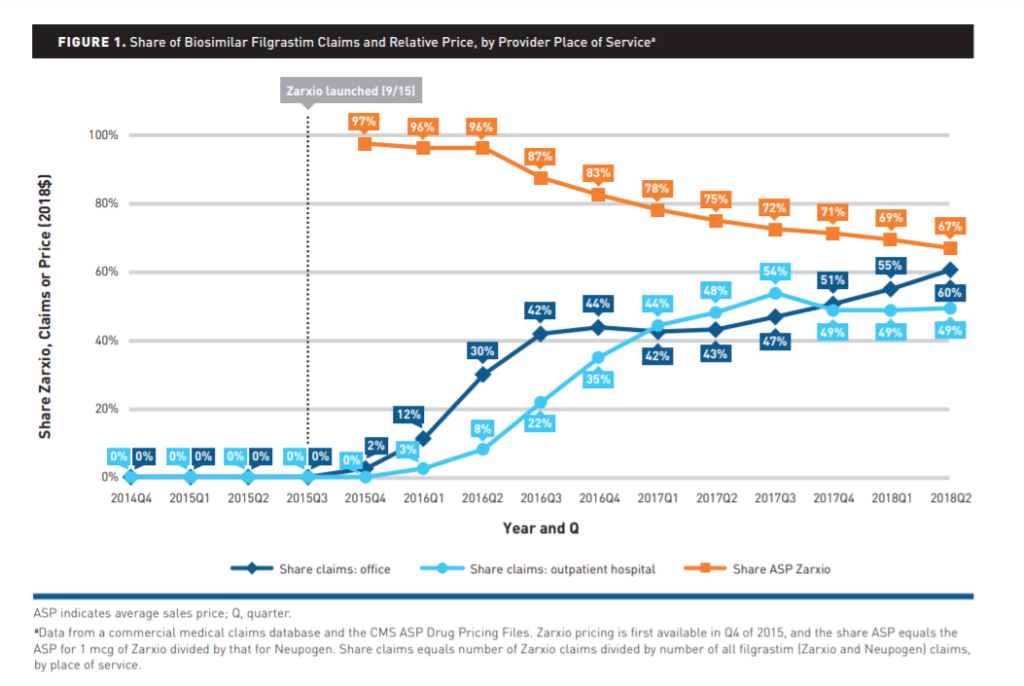 The research also showed that office-based providers began adopting the biosimilar even before mid-2018, when its average price fell by 67 percent. Meanwhile, use in outpatient hospitals conformed more closely to drops in cost.

Notably, as Zarxio use grew, providers tended to favor either the biologic or the biosimilar, with few offering both. “It may be similar to cola preferences,” Van Nuys says. “People tend to either drink Coke or Pepsi — but not many drink both. Few providers prescribed both the biologic and the biosimilar to their patient group.”

Aside from preference and habit, the researchers note that other incentives may also factor into this difference.

According to the study, office-based providers with greater numbers of HMO reimbursements, or who served patients who would be more burdened by direct costs, deployed the biosimilar more often. Reimbursement formulas likely contribute to this, as hospital-based providers are more likely to receive a percentage of overall charges that build in profit margins. Therefore, hospitals have less reason to use lower-cost biosimilars, as more costs lead to higher claims to commercial insurers. Hospital pharmacy and therapy committees may also play a role.

The researchers conclude that although the relatively slow pace of biosimilar uptake in this country may be frustrating, its trajectory indicates the making of a functioning market for this important new drug class. This study shows a definite advantage for biosimilars after providers learn about their characteristics and become comfortable with their use. While biosimilars remain more costly to produce than their generic-drug counterparts, they still offer the potential of significant savings while delivering the same high quality of treatment to patients.