Editor’s note: This blog was originally published by Health Affairs on April 8, 2021.

U.S. pharmaceutical expenditures have increased rapidly, and biologics are largely to blame. These drugs treat serious conditions such as cancer, inflammatory bowel diseases and neurologic conditions, and account for 40 percent of all US drug spending. Between 2014 and 2018, biologic spending rose from $83.6 billion to $125.5 billion, growing at a rate almost double that of traditional drugs.

To address the high and increasing cost of biologic drugs, recent policy efforts have focused on increasing price competition in these markets by introducing biosimilars, products with no clinically meaningful differences from an existing approved biologic (known as a reference product). To date, the Food and Drug Administration (FDA) has approved 29 biosimilars. Drugs such as filgrastim and trastuzumab currently have four to five biosimilar versions on the market.

But as the number of biosimilar options increases, hospital pharmacists and physicians also face more complexity in choosing which version of the drug to stock and administer based on payer policies. The impact of insurer formularies on clinical and logistical complexity has received little attention thus far.

Historically, when several versions of a physician-administered drug (e.g. biologic and one or more biosimilar products) are available, hospital pharmacy and therapeutics (P&T) committees have determined which version to use, simplifying the decision for hospital pharmacists and doctors to stock and administer one version for all patients treated. Similarly, in physician office practices where cancer drugs or other biologics are administered, a standard approach to choosing which drug will be used is typically determined by the physicians themselves.

In 2019, large insurers began issuing formularies specifying which version of a physician-administered drug they will reimburse, requiring physicians to administer specific versions based on each patient’s coverage. While insurers also express preferences over small molecule brand and generics, they typically do not specify which generic is preferred. This preference for manufacturer of biologic or biosimilar has created challenges for both pharmacy inventory and clinical administration decisions, the complexity of which increases as the number of biosimilar versions increase. Hospital providers can now face a dizzying set of rules that must be carefully tracked when treating patients with different insurers. If hospitals do not stock all versions preferred by their patients’ insurers, they may be required to custom-order insurer-preferred drug requests or physicians may engage in non-medical switching, whereby a patient’s drug regimen is changed to follow payer formulary rules rather than clinical decision-making. Unlike small molecules, storage and space requirement for biologics are already complex; biologics are unstable and sensitive to external conditions, and frequently require refrigeration or freezer storage.

An Example of Complexity: Pegfilgrastim

To illustrate the complexity these insurer formularies are creating, we investigated coverage policies between October 2019 and March 2020 for pegfilgrastim, a blood marrow stimulant that increases the production of white blood cells following cancer therapy. There were four versions of pegfilgrastim available at the time: Neulasta (originator biologic) and Ziextenzo, Udenyca, and Fulphila (biosimilars).

We compiled formulary notifications emailed by commercial insurance plans to one health system, which evaluated coverage policies and changes for these products. (This information can be verified by examining each insurer’s archived health plan.) We followed five insurers—Aetna, Cigna, United Healthcare, Anthem, and Blue Shield—which together cover about 40 percent of the health system’s cancer patients.

Exhibit 1 shows how each product was categorized across these insurers over time and illustrates several interesting facts. First, although the products are clinically interchangeable, coverage policies reflect different preferences across insurers. There was no consensus among insurers to prefer either the biologic or a biosimilar version: United preferred the originator biologic (Neulasta – pegfilgrastim) while Aetna preferred only biosimilars, and Blue Shield (and eventually Cigna) included both the biologic and biosimilars among their preferred drugs.

Exhibit 1: Formulary coverage for biologic and biosimilar pegfilgrastim, across five commercial insurers from October 2019 to March 2020 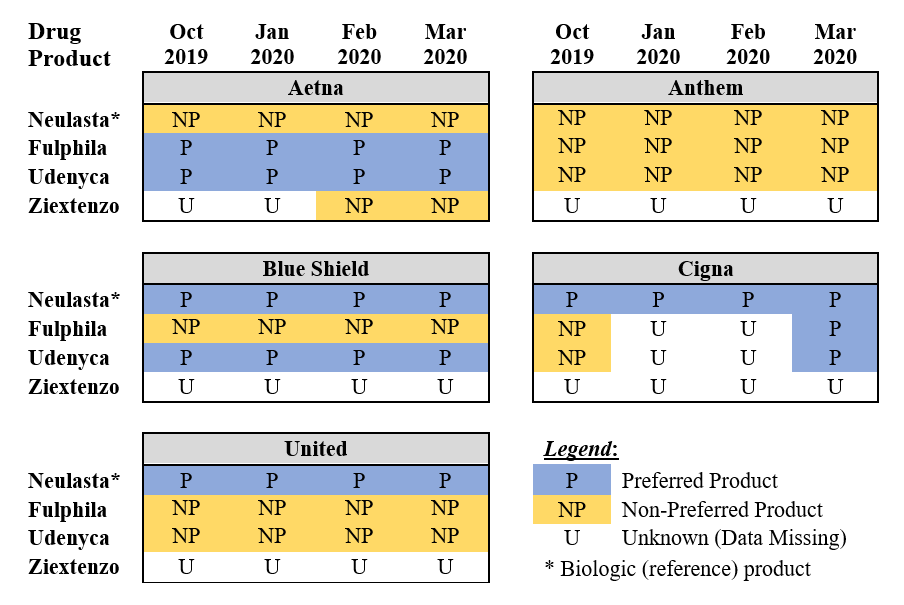 Formulary preferences can also change over time: Cigna changed Udenyca and Ziextenzo from non-preferred to preferred between October and March. And while we did not include Medicare coverage policies in Exhibit 1, we found examples of the same insurer preferring different products depending on whether the patient was a Medicare Advantage or commercial insurance beneficiary.

Taken together, these observations illustrate how payer-imposed formulary preferences add costs and complicate the work of hospital pharmacists and physicians. Rather than stocking one or two versions of a drug with no clinically meaningful differences and administering them to all patients, hospital pharmacies must inventory several versions depending on insurers’ preferences that month, increasing costs and complexity. Physicians, pharmacists, and nurses must check patients’ coverage at each administration, introducing delay and the potential for errors, especially in the case of cancer therapies where providers already must review a long checklist tracking the chemotherapy drug selected, associated biomarkers when needed, dosing, frequency, method of administration, and number of courses across several drugs for a given patient.

If a clinic does not have the specific drug version preferred by the payer, treatment may be delayed. For patients with rapidly progressive diseases, these delays can be life-threatening. In such cases, a clinically equivalent but non-preferred version may be substituted, exposing patients to the risk of paying its full cost out of pocket.

A Better Way Forward for Doctors and Patients

Doctors have raised concerns about non-medical switching because it may degrade clinical outcomes and increase overall health care costs. At the same time, drug policy experts have lamented the US’s relatively slow uptake of biosimilars and the lack of competitive pressure they are bringing to biologic markets. The recent trend of payers choosing which version of biologic drugs patients may receive solves neither of these problems.

Instead, changing insurer formularies—driven largely by negotiations between pharmacy benefit managers and drug manufacturers—further weakens doctors’ ability to determine which version of a drug is best for their patients and prevents true market competition from driving prices down. Beyond exacerbating these existing problems, these insurer preferences create additional problems for hospital pharmacies and, ultimately, patients who, in the end, are liable to receive worse care, or pay more for it—or both. Allowing hospital P&T committees to determine which version of a drug will be used for its patients puts these decisions in the hands of the clinicians who can consider both what their patients need and what can be efficiently provided by their pharmacy departments. In addition, allowing hospitals to negotiate prices directly with manufacturers would ensure that competitive pressure continues to drive costs down, and that savings benefit patients and providers rather than supply chain middlemen.