Editor’s Note: This analysis is part of the USC-Brookings Schaeffer Initiative for Health Policy, which is a partnership between Economic Studies at Brookings and the University of Southern California Schaeffer Center for Health Policy & Economics. The Initiative aims to inform the national health care debate with rigorous, evidence-based analysis leading to practical recommendations using the collaborative strengths of USC and Brookings.

Automatic enrollment into health insurance is an attractive tool to increase the number of people with coverage and facilitate robust health insurance markets, but actually implementing auto-enrollment poses a number of significant challenges.  One of the first challenges facing policymakers is the need to determine who is currently uninsured and therefore potentially available for automatic enrollment into coverage.  However, as many others have noted, individuals churn in and out of health insurance coverage frequently – so any source of information about who was uninsured at a prior point in time will not perfectly reflect who is uninsured today.

To illustrate just how significantly churn in and out of insurance coverage can frustrate auto-enrollment, this paper estimates how effective prior-month data about the uninsured would be in predicting the currently uninsured.

We consider a policy that would designate a group of people for auto-enrollment into coverage in a particular, fixed month (the “auto-enrollment month”) based on information about insurance status collected during some past month (the “look-back month”). To simulate this policy, we relied upon the Census Bureau’s Survey of Income and Program Participation (SIPP), a longitudinal household survey that collects information on insurance status. Our simulation treats December 2012 as the auto-enrollment month and examines look-back months between one and twelve months in the past. Full methodological details are provided in an Appendix to this blog post. 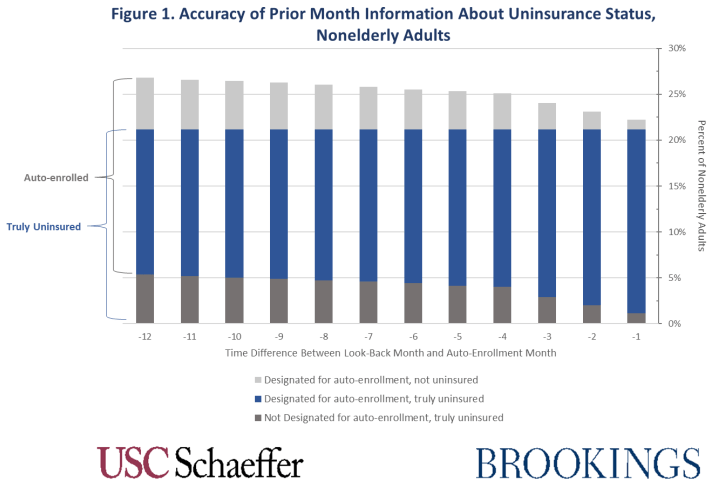 If an auto-enrollment policy were to use information about insurance status that is 5 months old, 20% of those auto-enrolled would in fact have other coverage, while 20% of the truly uninsured would not be auto-enrolled.

To put this in context, consider that tax filing occurs in mid-April, so insurance status information from December – the last month covered on the return — is already 4.5 months old [1] at the moment the individual files their return.  Thus, even if an auto-enrollment policy was able to immediately act on the tax return information, it would still be missing about a fifth of the uninsured while about one fifth of the people designated for auto-enrollment would have other coverage.  Further, changes in income, family composition, and other eligibility criteria would also create errors, so the picture is likely quite a bit worse in practice.

We use the Census Bureau’s Survey of Income and Program Participation (SIPP), a national longitudinal household survey that collects information on topics such as income, program participation, employment, and health insurance coverage. We rely upon the 2008 SIPP panel, which is the most recent SIPP panel that is suitable for our analysis.[2]

We focused on adults ages 19 to 64 in December 2012 who reported valid insurance status information for all 13 months from December 2011 through December 2012. Individuals were considered insured if they reported coverage from one of the following sources: Medicare, Medicaid, military health care, or private health insurance.

Limitations of This Analysis

This analysis has several limitations.  Most notably, for the reason described above, we rely on data collected prior to implementation of the ACA’s core coverage provisions. Therefore, this analysis does not reflect any changes in that rates at which individuals churn in out of coverage in the post-ACA environment.

In addition, in the 2008 SIPP panel participants were interviewed every 4 months and asked to recall their coverage status for each month in the applicable period.  SIPP encourages participants to use tools like financial records and calendars, but recall errors may still be significant. Indeed, a well-known limitation of the SIPP is “seam bias”: the tendency to report more changes in status between “on-seam” months — the last month of the previous interview and the first month of the subsequent interview. This could distort our estimates to some degree, although the precise nature of those distortions is uncertain.

Attrition is also a common problem in a longitudinal survey, and we expect a higher sample loss rate for the data we examined (Wave 11 to 14) than for the data collected earlier in the SIPP interview process.[4] While the Census Bureau tries to correct for the bias using weighting and imputation, our estimates may still be distorted.

[2] The Census Bureau has released data for the first three waves of the 2014 SIPP panel, which contain data for calendar years 2013 through 2015. However, analysis of churn for these years would be distorted by implementation of the ACA’s core coverage provisions.

[3] Note that SIPP tends to have lower overall uninsured rates than other national surveys such as NHIS, CPS, ACS, and MEPS.