USC Schaeffer Center Associate Director of Health Policy Erin Trish is making an impact above and beyond the halls of academia, utilizing her research expertise in health insurance markets to inform policymakers at the state and federal levels.

In January, Trish testified at a hearing for the California Assembly Select Committee on Health Care Delivery Systems and Universal Coverage regarding the possibility of changing the state’s health care to a single-payer system, in which a single public entity, or quasi-public entity, would finance health care for all instead of numerous competing insurance companies.

“I was very impressed by the rigor the committee is putting into these issues,” said Trish, who is an assistant research professor at the USC Price School of Public Policy and a fellow in the USC-Brookings Schaeffer Initiative for Health Policy. “I think they understand how massive something like a fundamental shift toward single payer would be. They recognize that there are a lot of inefficiencies in the current system, and they’re motivated to improve policy and health outcomes for California, while increasing the return on value for dollars we spend on health care in the state. At the same time, they want to make sure that what they do would actually be a positive and sustainable change.”

Weighing the Consequences of Potential Reforms 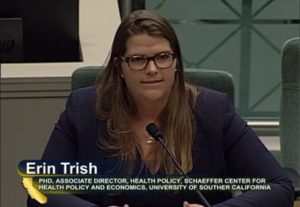 Trish’s testimony in Sacramento focused on the variation in provider payment by public and private payers that would need to be resolved in a single-payer system. Private insurers reimburse hospitals about 75 percent more than Medicare and Medicaid.

She concluded that choosing the right payment levels would be difficult in a uniform payment system, creating winners and losers, and that it could stifle innovation in provider contracting. However, it would be an opportunity to address high commercial prices due to provider market power, and could simplify administrative costs and align provider incentives over the full patient population.

“These decisions have significant implications in terms of revenue that hospitals and physicians would receive,” Trish said. “Where you set that rate would impact not just the state budget, but also quality and availability of care, whether a practice goes out of business, and the incentive a physician has to work in our state.”

Trish also recently spoke with staffers from U.S. House Energy and Commerce Committee’s subcommittee on Oversight and Investigations about the impact of consolidation in the health care sector on the delivery of care for patients. She passed along evidence suggesting that consolidation has resulted in higher prices for patients without increasing quality.
She furthered her public engagement efforts by presenting her work on policy options to reform the Medicare Part D program at an event hosted by the USC-Brookings Schaeffer Initiative for Health Policy in Washington, D.C. in February.

Trish said it was her interest in making an impact beyond the traditional academic world that drew her to the USC Schaeffer Center and the Price School.

“I came here to be in a place that supports traditional research disseminated in academic outlets, but also supports engaging with policymakers,” Trish said. “I’ve always focused on asking questions that had a very practical application. I also understand the trade-offs and constraints that policymakers face, and it is interesting to me to recognize those broader dynamics and be able to make feasible, evidence-based recommendations and communicate them in a way that policymakers and their staffers can understand.”

For Trish, hearing the questions that lawmakers have and what key piece of evidence might be able to change the debate also influences her future research.

“At the Price School, we believe that faculty should strive to conduct high-impact research that advances knowledge and contributes to discourse on critical challenges facing society,” said USC Price Professor and Vice Dean for Research Neeraj Sood. “Professor Trish’s work has significantly advanced our understanding of how health insurance markets work and what the new wave of consolidation in health care means for patients and employers.”