In order to better serve American patients, the structure of Medicare and Medicaid must be modernized with an emphasis on making prescription drugs more affordable, said Seema Verma, administrator of the Centers for Medicare and Medicaid Services, at a conference hosted by the USC-Brookings Schaeffer Initiative for Health Policy.

Focusing on Medicare Part D, the event took place at the Brookings Institution in Washington D.C. on Oct. 18 and was attended by 120 people and had over 400 online viewers.

Following an introduction by Leonard D. Schaeffer, Judge Robert Maclay Widney Chair at the University of Southern California and previous administrator of the Health Care Financing Administration (the precursor to CMS), Verma noted that spending for prescription drugs is the fastest growing piece of the Medicare budget, up from 17 percent, or $109 billion, in 2012 to 23 percent, or $174 billion, in 2016.

“Lowering the cost of prescription drugs isn’t just something we would like to do,” said Verma. “It is something that we must do in order to ensure the sustainability of our healthcare system.”

Verma highlighted strategies and regulatory structures that may help achieve this goal, such as incentivizing innovation, fostering competition, encouraging generic utilization, and increasing transparency within the system.

The administrator also touched on the possibility of expanding access to step therapy for Part B drugs, lowering prices for Medicare Advantage beneficiaries, and pushing to require drug prices in televised pharmaceutical advertisements. Verma noted that President Trump had recently signed legislation that eliminates gag clauses in pharmacy contracts that had prevented pharmacists from telling customers when they could save money by not using their insurance.

Reducing drug prices does not end with domestic policies, Verma said. She noted that the United States is shouldering much of the global burden of medical innovation, which contributes to American patients often paying the highest drug prices in the world. 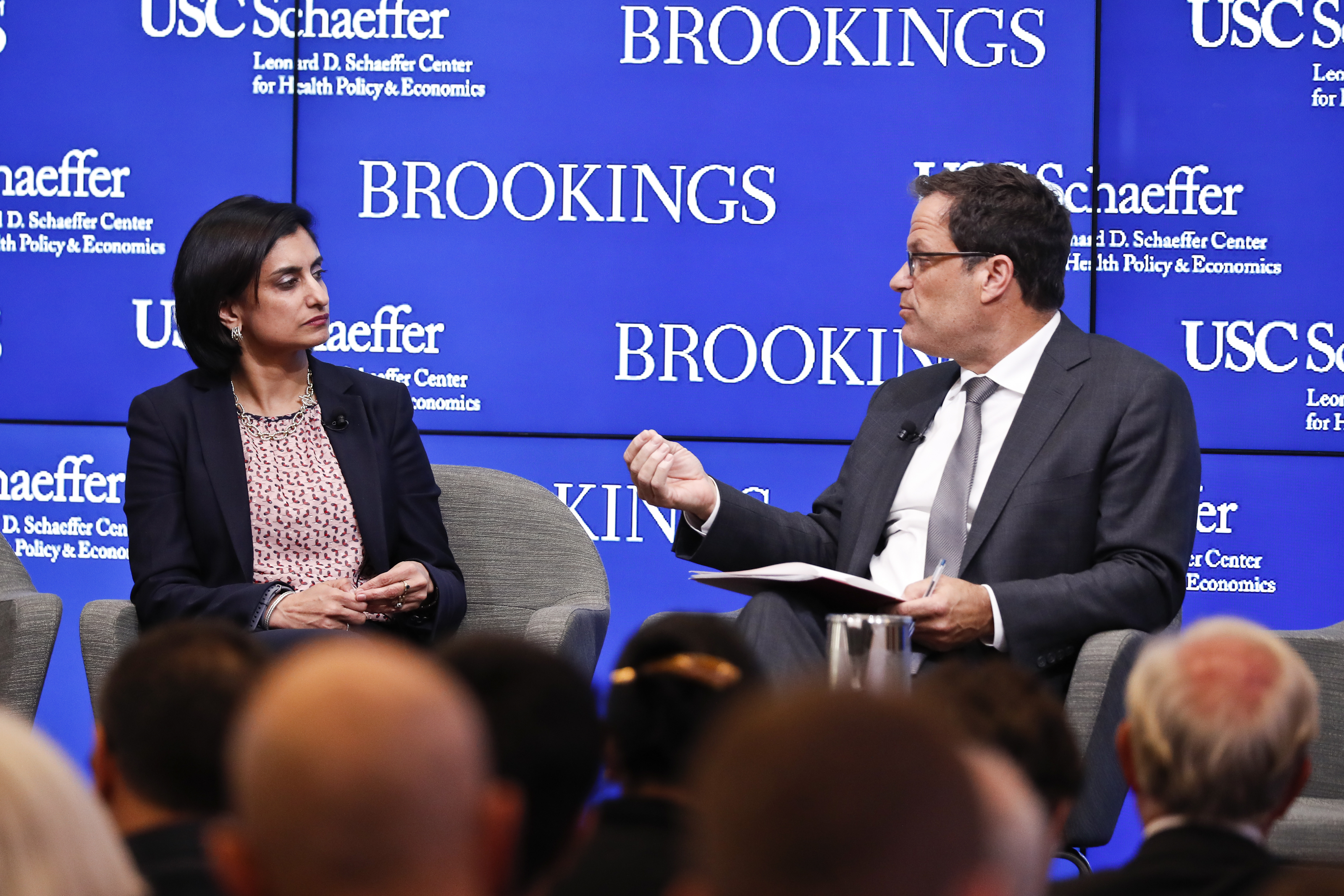 After Verma’s remarks, she and Dana Goldman discussed potential new payment models as one approach to lowering healthcare costs. Goldman is director of the USC Schaeffer Center for Health Policy & Economics.

When asked to expand on the benefits of value-based pricing, Verma stated her team is examining the regulatory and policy changes that need to be made to let these payments occur, noting the details of these alternative payment strategies are complicated to put into practice.

“What we want to do is make sure that we are allowing for this type of innovation and payment model so you’re going to see some more work from us on that to at least create the opportunities for other payers to engage in these types of payment arrangements,” she said

Policymakers and health economists alike should focus on how to “democratize payment structures,” according to Nussbaum. Examining how to effectively use therapies from clinical, as well as economic perspectives, can ensure patients are receiving sustained benefits and are able to pay for them over the course of treatment.

“We are spending hundreds of thousands on therapies that don’t have sustainable benefits,” he said. “We need to figure out how to best and effectively use these therapies.” 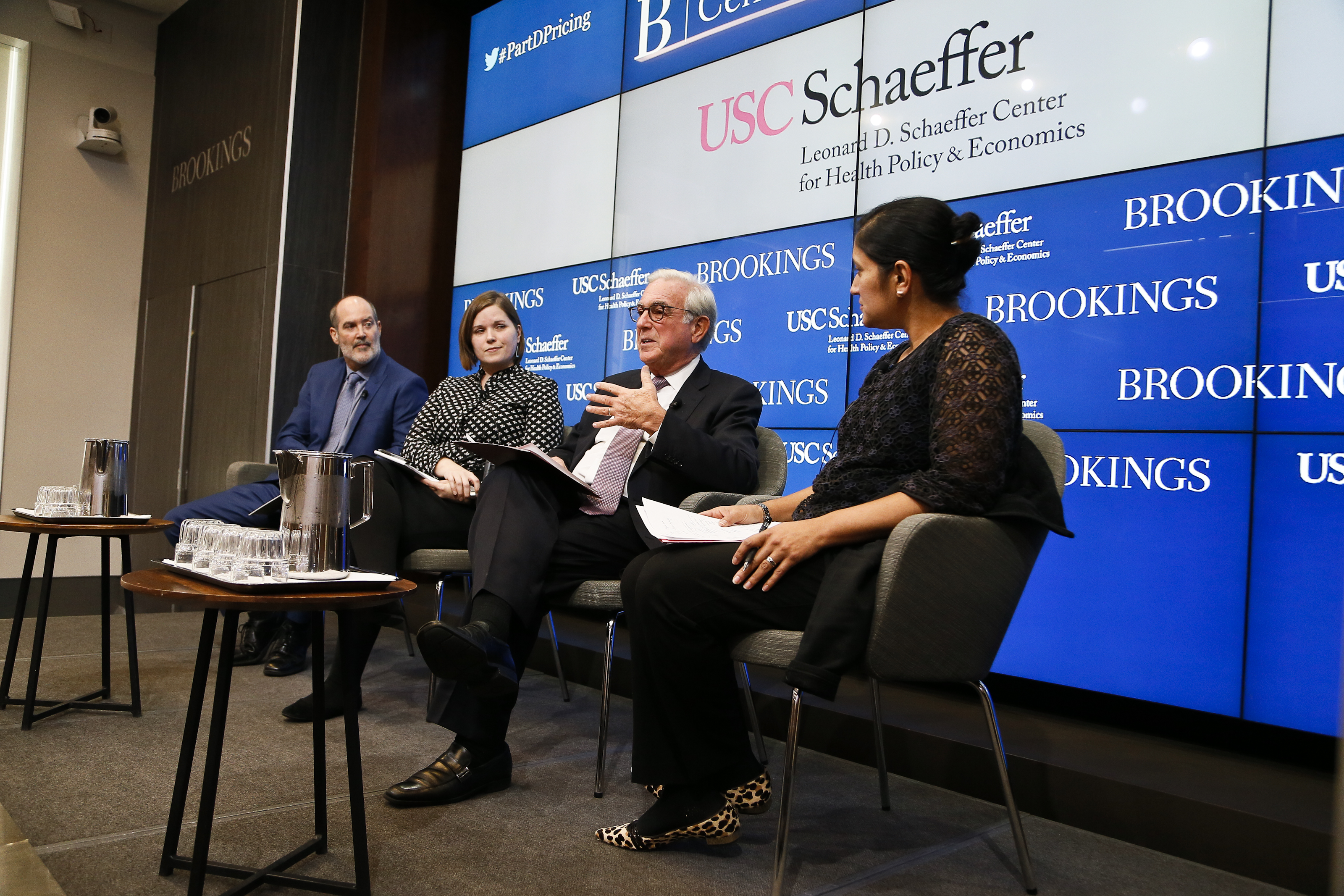 Providing incentives to ensure the pharmaceutical industry continues to innovate is critical, Joyce noted. “We could lower prices today and that will benefit today’s consumers at the cost of future innovation and people in the next generation,” Joyce said.

Joyce added that this must also be assessed with an eye on the different populations that rely on Medicare serves and their particular needs. This includes educating patients about choices available to them right now and incentivizing those choices.

Patient education and understanding of the insurance system is a key component in all of this, according to Dusetzina. Beneficiaries are often confused about the difference between copayments and coinsurance, why treatment and drug costs vary widely from month-to-month, and the various rules and regulations around reimbursement.

“Literally month-to-month your expenses can change and even telling someone the average amount you might pay out-of-pocket over the course of the year may be helpful, but it does not reflect what you might pay at a specific visit,” she said, adding that this all adds to the public frustration with drug costs.

Broadly, Part D has been a success, said Joyce, citing lower costs and beneficiary satisfaction levels. But, there are important concerns that policymakers need to address, especially as new, more expensive drugs come on the market. “We need to make changes sooner, rather than later to modernize Medicare.”