Editor’s Note:  This analysis is part of the USC-Brookings Schaeffer Initiative for Health Policy, which is a partnership between Economic Studies at Brookings and the University of Southern California Schaeffer Center for Health Policy & Economics. The Initiative aims to inform the national health care debate with rigorous, evidence-based analysis leading to practical recommendations using the collaborative strengths of USC and Brookings. This work was supported by a grant from Arnold Ventures.

Federal legislators are looking to recent state policies as models as they put forward proposals to address surprise out-of-network medical bills, but in part because many of these state laws are relatively new, little empirical evidence exists about their impacts. This blog presents new evidence on observed changes in provider network breadth after the implementation of California’s 2017 law.

California’s 2017 law, in particular, has been the subject of intense debate, as it bears significant resemblance to the two leading (and similar) Congressional proposals – one from the Senate Health, Education, Labor, and Pensions (HELP) Committee and another from the House Energy & Commerce Committee – that prohibit surprise balance billing and mandate a minimum payment standard from insurers for affected out-of-network services. A recent law in Oregon also takes a similar approach.

Specifically, California’s law requires fully-insured plans to pay out-of-network physicians at in-network hospitals the greater of the insurer’s local average contracted rate or 125 percent of the Medicare reimbursement rate. For providers who surprise bill patients or gain leverage in negotiations with insurers from the ability to do so, in theory this payment standard approach should decrease their relative bargaining leverage (unless they were receiving payment below the payment standard). By decreasing the value of being out-of-network, economic theory predicts that such a law should increase network participation, at least in the long-run. However, some have expressed concerns about network breadth due to the possibility of insurers canceling contracts of highly paid provider groups, providers refusing to contract at low rates, or some combination of the two. Unfortunately, given the limited time post-implementation, we are unable to comprehensively evaluate how such recent state policies may have impacted network breadth, the cost of care, and other market dynamics.

This void leaves a lot of room for unsubstantiated claims by stakeholders. The California Medical Association (CMA) published a public letter in July urging federal lawmakers to avoid California’s payment standard approach, asserting that it had diminished networks and reduced access to specialty care in California. Specifically, the CMA alleges that California’s policy resulted in narrower networks and adversely affects patients’ access to in-network care, stating:

However, the CMA does not cite empirical research supporting any of these assertions.

While AHIP’s evaluation of the number of contracted physicians sheds light on one measure of network breadth, it doesn’t paint the full picture of potential impacts of the state policy on commercially-insured patients’ access to in-network physicians. AHIP computes the average growth across plans as a straight average without weighting by the number of covered lives in each plan. An increase in the count of the number of in-network physicians also does not necessarily translate directly to access to care if some of those physicians practice part-time or are not geographically distributed in alignment with where patients in the health plans are living.

Moreover, both health insurers and health care providers have a financial stake in the shape of future policy, and therefore there is a need for objective, independent research on state policy effects to inform federal legislators.

To help inform this question, we employed FAIR Health commercial insurance claims data to measure the share of specialty professional services provided in- and out-of-network in California before and after their surprise billing law was implemented.[1] The data included in our analysis comprise over 17 million specialty physician claims in California from services provided in the inpatient, ASC, and emergency room settings – 10.3 million inpatient and ASC claims for the specialties most affected by the law (anesthesiology, diagnostic radiology, pathology, assistant surgeons, and neonatal-perinatal medicine) and 6.9 million claims for emergency medicine (which were unaffected by the law). Henceforth, we refer to the above list of specialties most affected by California’s law as the “affected specialties.” Because emergency services were unaffected by California’s 2017 law, we utilize the emergency medicine claims as a pseudo-control group for illustrative purposes, though we note that all comparisons are observational in nature. 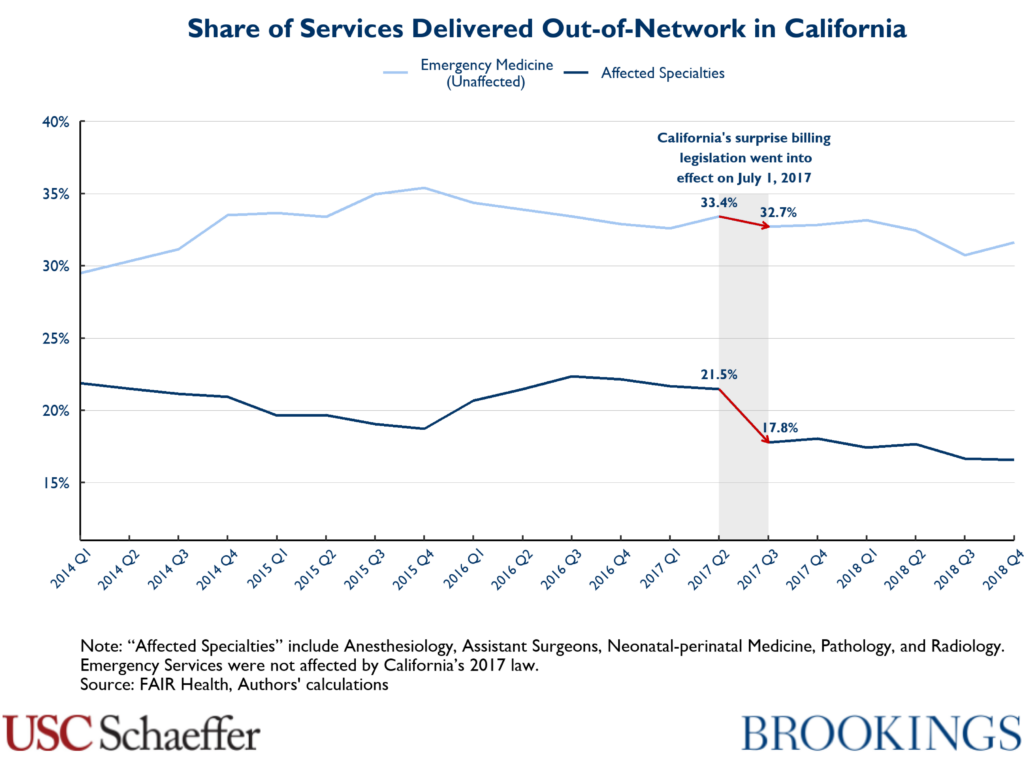 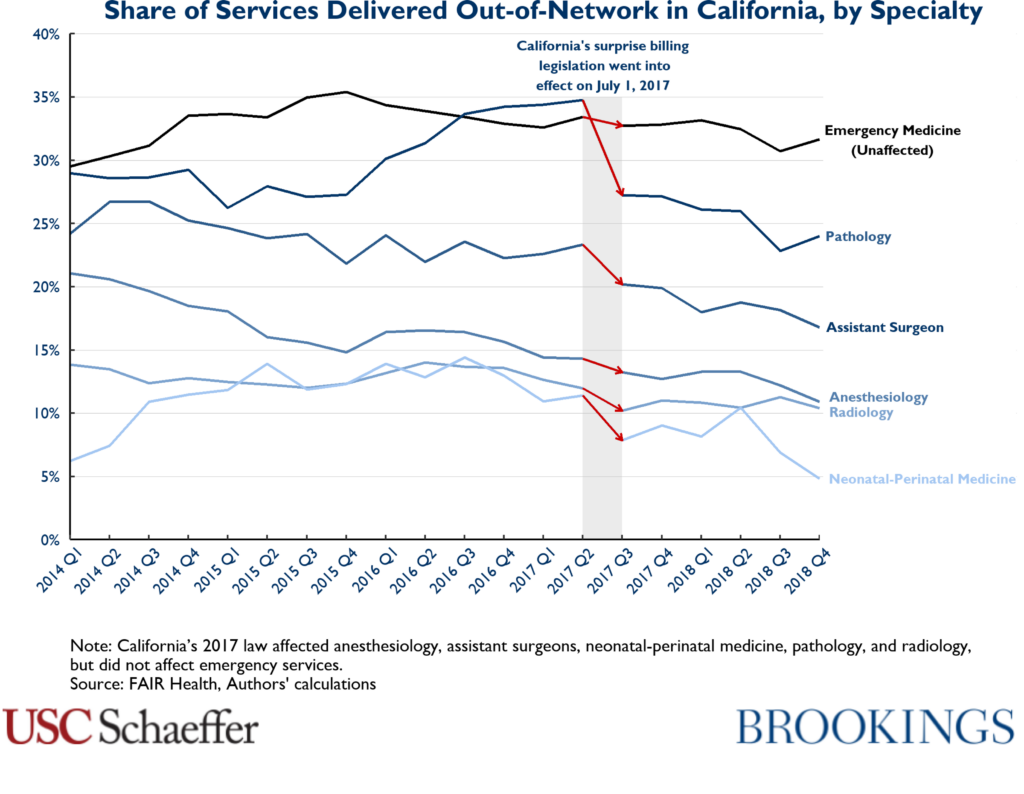 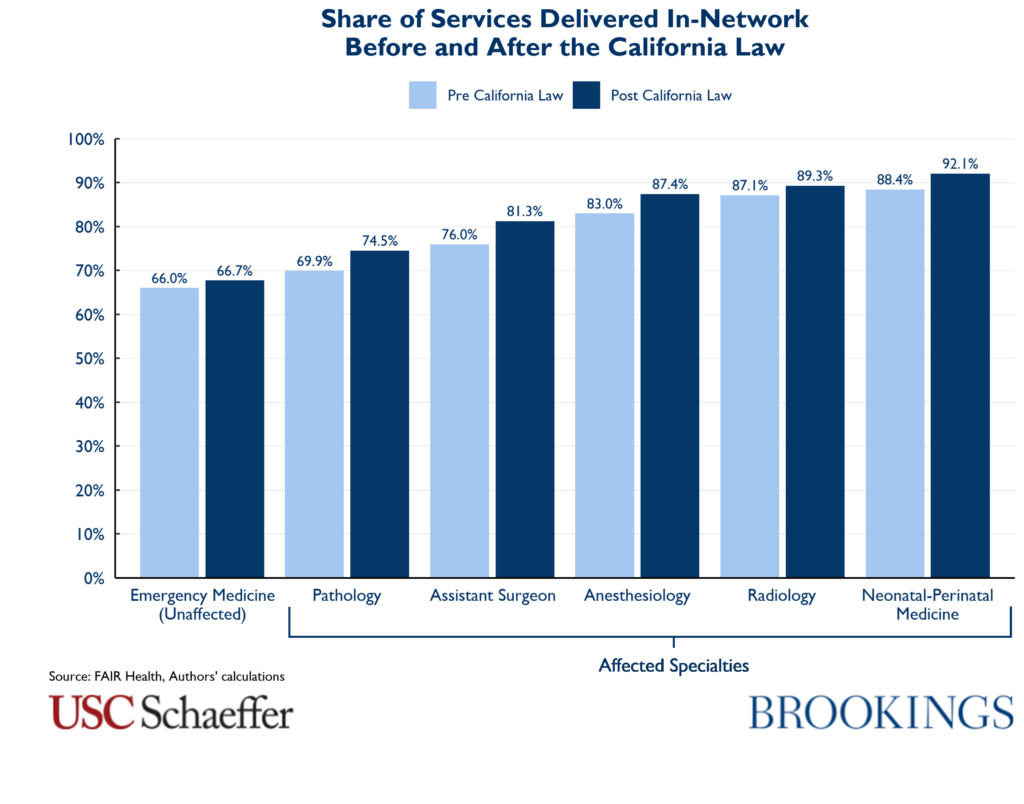 There are several notable limitations to our analysis. Firstly, FAIR Health’s data does not include all commercial claims in the state of California and network status was missing for 27 percent of the claims for these physician types in the dataset used for this study.[2] Therefore, these findings may not be generalizable to all commercial plans in California. Second, our post-policy period covers only the first 18 months after policy implementation and we evaluate only one policy outcome – realized network breadth. Thus, while our descriptive analysis is objective and informative, there is a need to conduct a more thorough policy evaluation using more robust control groups and exploring impacts on other outcomes, including the cost of both in-network and out-of-network professional services. Additionally, California’s law only directly applies to enrollees in fully-insured plans, though our analysis includes claims from enrollees in both fully- and self-insured plans. However, since there is generally considerable overlap in networks between an insurer’s fully- and self-insured products, the law may have impacted contracting dynamics in the overall commercial market. Finally, California has a unique policy environment with strict network adequacy requirements, thus policy effects observed in California may not be fully generalizable to other states.

While this analysis cannot provide a definitive answer as to the impacts of California’s surprise billing policy, we do observe a modest shift toward claims from in-network service providers across all the affected specialties timed to the law’s implementation, and we do not see similar changes for emergency medicine, which was unaffected by the law. That these shifts toward in-network care are consistent across the affected specialties contradicts CMA’s claim of widespread diminishing network breadth. Moreover, the timing and magnitude of the changes we observe provide some suggestive evidence that California’s law may have reduced the share of services delivered out-of-network by the affected specialties. Notably, such a decline in the frequency of out-of-network care after California’s 2017 law would comport with predictions from economic theory, as the law reduces the rewards to remaining out-of-network.

However, without a more thorough analysis, these increases could simply be a byproduct of a broader trend in California. There is a critical need for additional research to understand impact of policy on other important factors – including contracted rates and total cost of care – as well as evaluation of longer-term effects.

We define the pre-policy period, based on FAIR Health data availability, from January 2014 through June 2017 and the post-policy period from July 2017 through December 2018. We focus the analysis on specialties most affected by the law and for which FAIR Health claims data are available to us. In ASCs, we evaluated physician claims for anesthesiology and pathology.  In the inpatient setting, we examined physician claims for anesthesiology, assistant surgery, neonatal-perinatal medicine, pathology, and radiology. Pathology, radiology and anesthesiology comprise 90 percent of the inpatient and ASC claims included in this analysis, with pathology services representing 38 percent of the claims, and radiology and anesthesiology each representing 26 percent of the claims. Emergency medicine services were not directly regulated by the state’s surprise billing policy, so we evaluate change in network status of emergency medicine services performed in emergency departments as a pseudo control group.

We received information from FAIR Health on over 23 million claims for these ASC, inpatient, and emergency medicine specialty physician services in California during our study period, and network status was identified in 73 percent of claims. We analyzed 10.3 million inpatient and ASC claims for the affected specialties, and 6.9 million claims for emergency medicine with available network status information. We calculated the share of claims provided in-network and out-of-network in the pre-policy and post-policy period for each professional specialty, and present these percentages in the above exhibits.

[1] FAIR Health is an independent nonprofit organization that collects data for and manages the nation’s largest database of privately billed health insurance claims and was established to bring transparency to health care costs and health insurance information.

Trish is a consultant to a capital management firm and to the Blue Cross Blue Shield Association. No other authors report disclosures.